Regarding Ebola: Mayor Jackson, City Officials Implore Media Not to Freak the Fuck Out 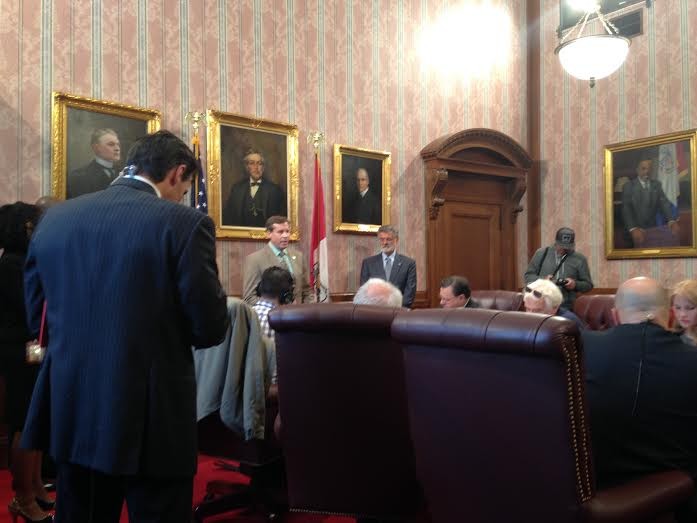 At a press conference Wednesday afternoon, Mayor Frank Jackson, Director of Public Health Toinette Parilla, Assistant Public Safety Director Ed Eckart and Director of Port Control Ricky Smith stressed that though they learned a woman who was found to be infected with Ebola flew from Cleveland Hopkins International Airport on Monday, there are no known cases of Ebola in the city.

Still, they're taking every precaution. Smith said that the Frontier Airlines aircraft in which the woman flew has been decontaminated twice and will be in service to Denver this afternoon.  (A Hopkins spokeswoman later told WCPN's Nick Castele that the plane was set to go to Denver, but will now be flying to Atlanta at 4:05 p.m.).

Smith said that key facilities on Concourse A — bathrooms, jetway — will be cleaned as a precaution, and that appropriate airport personnel will wear protective equipment generally used by the fire and rescue staff. Smith said that the city was alerted of the situation "at about 6:10" this morning.

Mayor Jackson, when asked why it took until 2 p.m. to assemble a press conference, stressed that getting the facts organized was critical, and that they didn't want to cause undue anxiety with "rumors and speculation." He said he wanted to be as transparent as possible and reminded the gathered media that it was their job to inform the public.

That said, most of the specific questions regarding passenger Amber Vinson were deferred to the CDC. Public Health Director Toinette Parilla did say that Vinson was visiting Akron from October 8-13 and was in town, in part, to plan her wedding.

Parilla also reiterated that Ebola is transmitted via bodily fluids — blood, saliva, semen, etc. — not casual contact, but that the decontamination measures at the airport were strictly precautionary.

"Our job is really to educate the public," Parilla said, "and to ensure that we have the capability and capacity to detect, protect, and respond."

Here's the CDC page on Ebola for some helpful reminders.