Ricky Jackson and Wiley Bridgeman Are Finally Free, Nearly 40 Years After Being Sent to Jail for a Murder They Didn't Commit 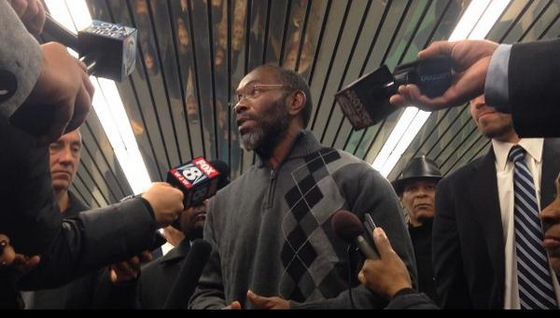 This morning, Ricky Jackson and Wiley Bridgeman walked out of jail, free men for the first time in nearly 40 years.

The two had been convicted of a 1975 murder on Cleveland's near east side, along with Wiley's brother Ronnie Bridgeman (who was released on parole in 2003), based on the testimony of a 13-year-old witness. Ricky Jackson had been pinned as the trigger man.

A 2011 Scene investigation into the case, which found the child's account was a lie told as a result of police coercion and threats, also pointed out numerous other holes in the state's evidence. The story led the Ohio Innocence project to take up the case.

Earlier this year, armed with a signed affidavit from the witness, Edward Vernon, recanting his original testimony, lawyers sought a new trial for Ricky Jackson, now 59 years old and with 39 years of wrongful incarceration under his belt.

A two-day hearing this week culminated with Cuyahoga County prosecutor Tim McGinty announcing the state would drop its opposition to defense counsel's motion for a new trial and dismiss all charges.

So did Wiley Bridgeman, who, except for a brief stint out of jail in 2002, had been in lockup since the conviction. All three had originally been on death row until 1978 when the Supreme Court shot down the death penalty and commuted all death sentences to life in prison.

Stay tuned. We'll have much more on this story in the coming days and weeks.