Violence never broke out during Tuesday's downtown protests and Shoreway blockade in response to the police shooting of 12-year-old Tamir Rice and the non-indictment of Ferguson police officer Darren Wilson.

Local news noted that while in other cities, protesters threw rocks at police officers, looted businesses, and set innocent vehicles on fire, the protesters in Cleveland were by and large a gentler and more respectful breed. The Fox 8 telecast (which I relay only via closed captioning) reported with great relief that though some "nerves were frayed" and the Route 2 traffic jam had been a major inconvenience, no one was injured.

Police, too, at Public Square and en route to the Shoreway, were well-behaved. Many of them even seemed in good spirits during the frigid late-afternoon proceedings. When I confronted one to see if any arrests had been made, he happily told me that he wouldn't be commenting, and ragged me a bit when I continued to ask. Another officer confessed he had no idea what the protesters were planning, but seemed ready and willing to escort the throng wherever it may have lead.

Cops, in fact, tried to block the 200-300 protesters from funneling onto Route 2, but they didn't resist when the chanting mass walked right by them. There was no riot gear or military equipment of any kind in sight.

Police Chief Calvin Williams himself was a presence on the Shoreway as well, convening with his officers and then speaking personally to both motorists and protesters before departing for the community forum at the Cudell Recreation Center, where Tamir Rice was shot. 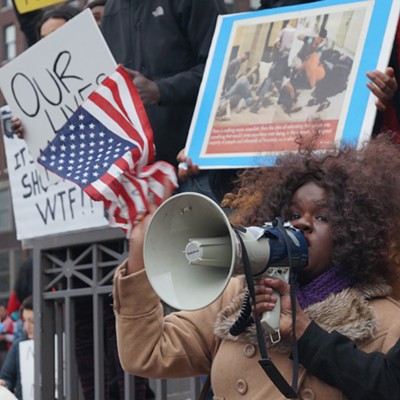 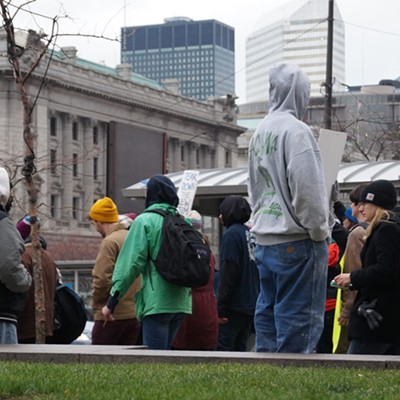 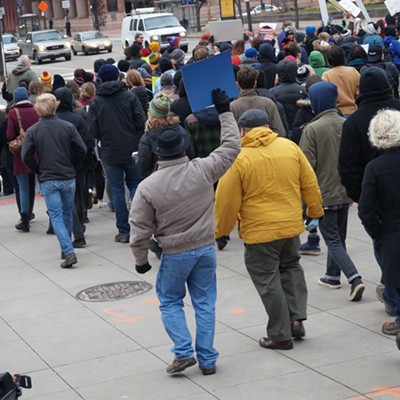 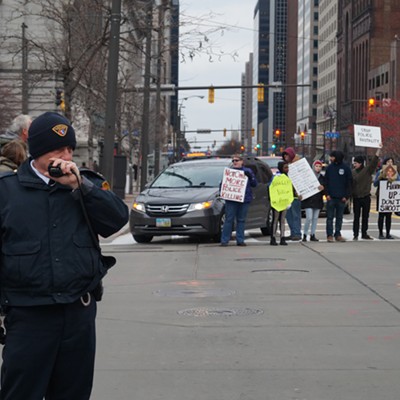 "Whose Streets? Our Streets." Pics from Cleveland Tamir Rice Protest
Click to View 21 slides
(The surveillance video showing the police shooting will be released Wednesday at 1 p.m., at the request of Tamir Rice's family).
At 5:30 p.m., after roughly 45 minutes of blocking Shoreway traffic, protesters peacefully returned to Public Square via the W. 3rd exit ramp, having made their point loud and clear.

Earlier in the afternoon, though, when young people were taking turns at the megaphone willy-nilly, the tenor of the protest seemed to skew toward the confrontational:

"I don't give a fuck that media is here," shouted one young man, who identified himself as mixed-race. "Black people are fucking dying."

A young black woman stood with the American flag and started a "Fuck this Flag" chant. Several youths took turns shouting "Fuck the police" into the megaphone while the crowd grew in size and energy with the arrival of contingents from local universities and high schools, including a group of nearly 75 students from Oberlin College.

One woman, in prepared remarks, said that people had been quiet and nonviolent for too long, and that the system's treatment of blacks demanded a commensurate action in response. "If that action is violence," she said, "that action is valid."

Protesters moved from the Square's Southwest (Tower City) quadrant to the central intersection of Superior and Ontario, forming a complete circle and shouting "Hands Up! Don't Shoot!," "No Justice, no peace! No racist police!," and, formidably, "Whose streets? Our Streets?"

At one point, protesters laid down in the street en masse.

"We had definitely planned to be disruptive, to disrupt business as usual," she said. "But part of what we were doing was constantly processing what people were saying and what leadership was thinking. When the Shoreway idea came up, we jumped on it."

Steiner said she was very pleased both with the turnout and with the reception of the protest.

"It was very very heartfelt," she said. "To be honest, you can't control a group of 300 people. But on the other hand, the unity that was displayed was incredible. There were times when we had no idea what we were doing next. But when a decision was made, we were able to communicate effectively with everyone. You know, 'at 4:02 we're all gonna lie down."

After the Shoreway blockage and the return to Public Square, many of the protesters caravanned over to Cudell, Most of them drove.