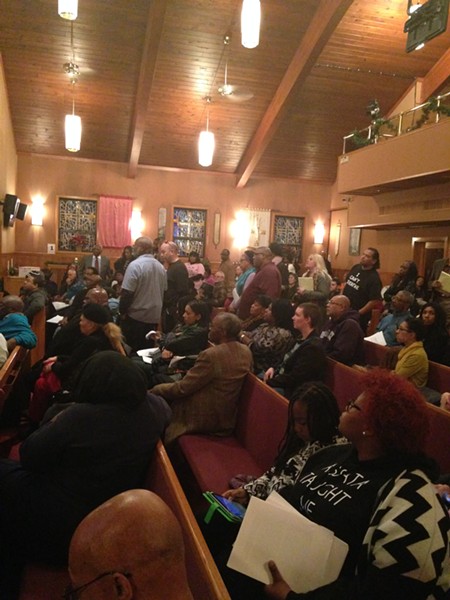 Copies of the full DOJ report were made available to attendees upon arrival, and Dettelbach encouraged everyone to thoroughly read his team's findings, which (as I'm sure you've probably gleaned for yourself by now) were appalling.

If you haven't yet, you all really should read the report as well (linked again here for total convenience). It's long, but rarely boring, and frequently nuts. The fact that Mayor Frank Jackson continues to interpret it as little more than an op-ed, as a thing to be corroborated by some dubious, lengthy internal investigation, is unreal.

Monday evening, Dettelbach confirmed in introductory remarks that the report took some 20 months to complete. He said his team reviewed more than 600 individual uses of force by the Cleveland Division of Police over a recent 2.5-year span and "thousands of pages" of documents.

To produce as comprehensive a document as possible, Dettelbach said, they interviewed community leaders, residents, police officers, chiefs, the safety director and the Mayor's office.

After summarizing the findings — if you hadn't heard, the DOJ found a demonstrable "pattern or practice" of Cleveland police using unreasonable force, in violation of the Fourth Amendment  — Dettelbach did the best he could to adequately respond to community members. They voiced concerns relating to transparency, community involvement, officer accountability, and often lobbed big-picture (almost philosophical) questions at Dettelbach about justice and race.

Mt. Olive's Senior Pastor Larry Harris got flak from several outraged attendees who felt he was cutting them short, but Harris insisted that those with questions only ask one, and that they refrain from prefacing them with tangential personal remarks, which many provided nonetheless.

The Q&A portion got off to a rocky start when a man named Pierre Napier identified himself as the "storyteller of Cleveland," and got in Dettelbach's face to say that he'd been battling the Neo-Nazi Cleveland Police force for years. He wanted Dettelbach to identify his role and relationship with them.

One woman echoed the sentiments of many questioners when she said that the report failed to address racial profiling in its findings. One man asked what good body cameras would do when citizens were already filming incidents of unreasonable force with no repercussion for officers.

Dettelbach fared well enough, begging the crowd to believe that he was on their side, that many of their questions were the same questions his report sought to illuminate.

Going forward, Dettelbach stressed two necessary improvements in the Cleveland Division of Police: more consistency in the way the department reviews cases  — "Consistency in the disciplinary process is almost as important as the consequence itself," he said. "Not quite as important, but almost." — and a serious commitment to community policing, with measurable outcomes.

"[Daily community policing] really hasn't been baked into the culture," said Dettelbach. "It's perceived by officers as something extra."

That lack of community policing has created an "us vs. them" mentality in many Cleveland neighborhoods, Dettlebach said. And the department's utter disregard for consistent review policies has created a "rubber stamp mentality."  Furthermore, a lack of training and support has beaten down even those officers who entered the force with enthusiasm and good intentions.

Responding to questions about the first DOJ report on the Cleveland police (conducted in 2002), a report with "starkly similar" findings to this one's, Dettelbach said that city had entered into a one-year "voluntary agreement" afterwards, and that when that agreement expired, the changes "didn't stick."

That's why the U.S. Attorney's Office is so staunch about the forthcoming consent decree, which will be negotiated with the city and will be enforced by Federal Court and managed by an unbiased monitor (likely a lawyer), to ensure that agreed-upon benchmarks are being achieved. Dettelbach said that the consent decree will not expire until there's an observed period of "sustained compliance."

Though breakout sessions were initially scheduled, so many attendees at Mt. Olive had questions and comments for Dettelbach that there wasn't time. Dettelbach, who remained poised and sincere throughout, offered to come back, saying that community feedback was essential for a successful consent decree.

One of the final questioners was a woman who identified herself as Tamir Rice's aunt. She thanked Dettelbach for being present at the forum and for his patience, even when many within the crowd had lost their temper. She broke into tears when she asked why her little nephew had to die.

Dettelbach said he needed no thanks for simply doing his job.

"It's me who should be thanking you," he said.