Life Inside a nuCLEus Architectural Rendering 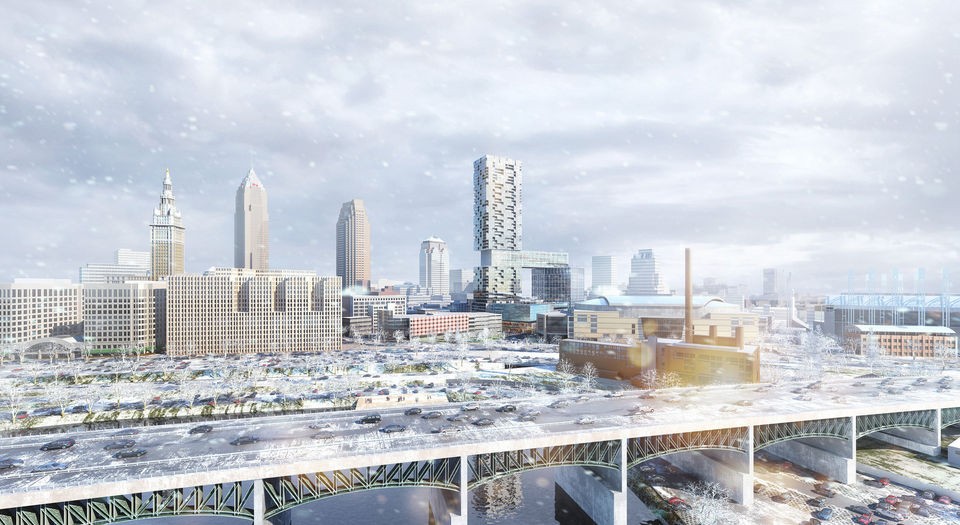 The snow is falling. I try to kid myself into believing something will be different when I wake up each morning – perhaps just a cold rain? – but the snow never stops. It's been years since we last saw the sun.

Before I return to the mines for the day, nuCLEus Bot 2021 has ordered me to retrieve a satchel of goods from across the river. There was a time when I might have argued, but the bots' heat-seeking laser vision is unbearable when discharged. We know all too well the fury of our nuCLEus masters. Even frozen skin feels pain if it's sharp enough, I guess.

I've pretty much acclimated myself to the routine by now. Upon leaving our cell blocks, Class 2020 nuCLEus Bots will strip and flay our bodies, further instilling the Tower's rigorous political dynamics. We will be ushered to the ground floor, where the Shift Supervisor will inspect our data chips and update our internal tracking algorithms. A temporary Shadow Bot will be assigned to accompany us on our excursion outside the nuCLEus. If all goes well, we'll make it back to the Tower with only mild delirium and but a few broken bones.

The world outside is a strange one. Cars — or what we once called "cars" — remain frozen to old bridges, affixed in time and reminding us that things were different before the Overthrow. What few Free People are left in Cleveland are mostly relegated to old warehouses, burning CLE T-shirts to stay warm and chanting the rhythms of yesteryear. Some, like Tony Rizzo, all grizzled and cloaked in madness, brazenly call the Chancellorship and its minions into the wild. Skirmishes in the foothills of Old Ohio City often end in bloodshed or worse. Even if I wanted to venture into the Other Zone — and I certainly don't after what happened — my assigned Shadow Bot wouldn't allow such a thing.

Goods retrieval is simple enough, though. Provisions from the Capital City are deposited in designated reception centers on the far side of the river. Since bridge travel has been banned for the past two years, hovercraft are readily available most days, which has been a rare blessing. Per government regulations, the vehicles can travel at an altitude of 100 yards, just out of reach of the river's mutant ice-catfish. Their tentacles sting like a [CHANCELLORSHIP CENSORED ITEM NO. 2999-K] — especially the green ones!

At the appropriate reception center, my Shadow Bot will apply a laser-activated tether to my neck before we are permitted to enter. Once inside, Receiver Drones will scan my tracking codes and shrink the corresponding goods satchel into a tiny capsule, which is then inserted somewhere along my spine. Like many processes since the Overthrow, I've grown accustomed to the blinding pain that accompanies Capsule Integration.

The route back to the nuCLEus is much the same — perilous encounters with the Free People; tentacle-waving fire-breathing (had I mentioned the fire?) ice-catfish; flashes of dysphoria (often brought on by snow lightning or errant Browns programs fluttering out of the sewers); a bombardment of cyber-advertisements for intravenous craft beer, despite the Chacellorship reserving alcohol consumption rights solely for Class 4000 Bots and higher.

Back at the Tower, we are once again flayed upon arrival. Class 2020 nuCLEus Bots dislodge whatever capsules we are hosting and enlarge the contents within. It is never clear to us what these capsule-satchels contain. We know not to question any decisions within the nuCLEus structure.

50 floors up, the cell block is buzzing with frenzied slurping. Before being transported to the mines and after any Bot-sanctioned chores have been completed, we are allowed the day's one HelioPak, a government-approved gelatinous Food Substitute. The bots lock us into the Feeding Cage before applying the mechanical straw. The HelioPak drains quickly, so we must be ravenous in our delight. We feast.

nuCLEus Bot 2021, gazing down with empty laser eyes, is a good master.