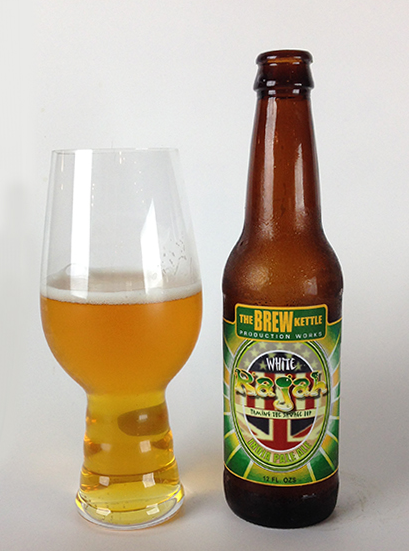 We're pretty big hop heads here at the Scene HQ, which is why we're pleased as punch to report that one of our own northeast Ohio's breweries has snagged top honors in a national blind IPA taste test.

Here's the rave, directly from the horse's mouth:

The verdict: A few weeks before we started tasting IPAs for this challenge, my father texted me from the Cleveland area, saying he was eating dinner at a place called The Brew Kettle while on a business trip. An affirmed hop head, he was drinking their White Rajah IPA, so I looked it up. Seeing its critical praises, I added it to our list of beers to acquire, thinking that perhaps it would be a dark horse candidate.

Fast forward to the day it first appeared in a preliminary heat, and we were utterly blown away. The aromatics on this beer are otherworldly—it is extremely hop-forward, with an intensely resinous, “green” blast of fresh, sticky pine needles, followed up by huge citrus. Malt? This IPA don’t need no stinking malt! It’s close to bone dry—what sweetness is present is almost hop-derived by its intense citrusy qualities. The flavors (and bitterness) are just huge and almost overwhelmingly assertive, but we were drawn in over and over for more. Here’s the note from the one professional brewmaster present at the tastings: “Just perfect.”

We’ve praised a whole lot of balanced beers in the course of making this list, but in the end, when you drink an American IPA, on some level you’re looking to assault your palate with with the best in American hops. That’s what White Rajah represents. It’s an absolutely incredible beer, and although its critical ratings are through the roof, we are amazed that we don’t see its name mentioned more often in lists of the greatest American IPAs. Disagree with us? Conduct your own blind tasting, include White Rajah, and see what happens. It’s the champion of our 116 IPA tasting. Congratulations, Brew Kettle.