Reminder: Traffic in Downtown Cleveland is Going to Be a Nightmare this Week 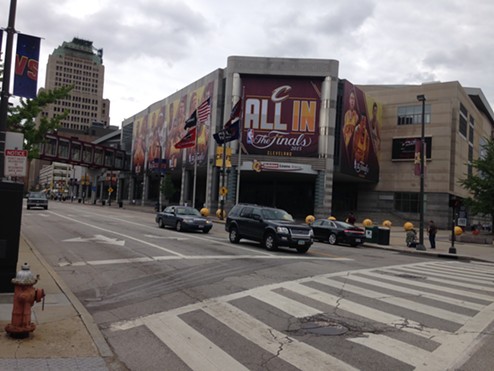 Driving in downtown Cleveland this week is going to be complete hell.

Our suggestion: Avoid it, if you can.

With the Cavs facing off against the Warriors for the third game of the Finals at home Tuesday, and the Indians squaring off against the Mariners, downtown is guaranteed to be filled with automobiles and the road-raged sports fanatics who drive them.

Parking garages and lots will fill up quickly, and will cut deeply into your beer budget for the night. Expect to pay upwards of $40 for a prime spot.

Parking on the street near the stadium is not an option as parking bans will go into effect starting at 4 p.m on Tuesday. No official no-parking list has been released for Tuesday’s game yet, but based on the playoff games against the Bulls these are the areas we expect fans won’t be able to park:
Ditch the car and take a different mode of transportation. Here are some tips to for your trip downtown:   We expect pretty much the same awful traffic for Thursday night's game. But the Cavs are in the NBA Finals, so who cares?