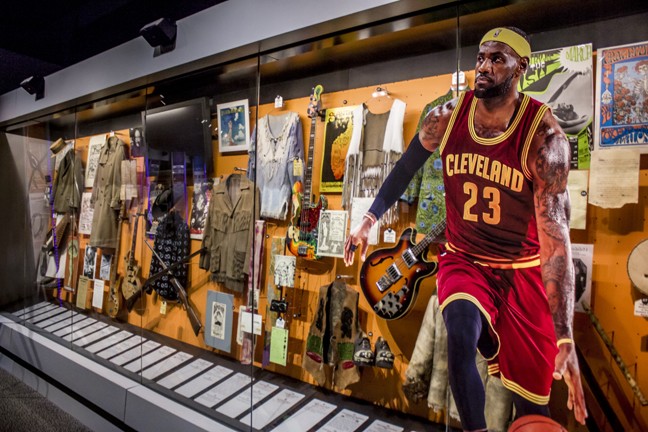 The Rock and Roll Hall of Fame and Museum is showing its support for the Cavaliers by putting up a life-size poster of LeBron James in front of a San Francisco-themed exhibit.

Last night, the Cavs took a 2-1 series lead against the Golden State Warriors, and now the Rock Hall is rubbing it in their face by partially obscuring some of the 60s-era psychedelic rock artifacts in the San Francisco section of the museum's Cities and Sounds exhibit.

Support for the Cavs is also spread throughout the Cleveland Rocks exhibit, dedicated to the history of rock 'n' roll in Cleveland, as well as throughout other exhibits that make mention of California. A Cavs flag is flying in the front plaza.

It all went up yesterday, as did a Cavs flag out in the front plaza, and the paraphernalia will remain intact until the end of the series WHEN CLEVELAND TAKES HOME THE CHAMPIONSHIP.

The exhibits themselves won't be changed and everything is still accessible for visitors with the added images.

The Rock Hall joins other Cleveland institutions that have gone "All In," including the Cleveland Museum of Art, the Cleveland Orchestra, and pretty much any downtown bar on game night.