Ohio Senate Provision May Keep Bars Open Until 4 a.m. During the RNC 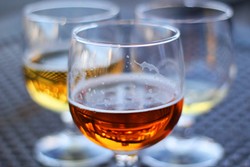 The Ohio Senate wants to put the party in "Republican party" by keeping Cleveland's bars open until 4 a.m. during the Republican National Convention.

State Sen. Tom Patton, a Strongsville Republican, added a provision to the Senate's budget plan that would allow certain establishments to stay open extra late, especially for convention-goers who may not leave event functions until midnight.

If passed, a limited number of Cleveland bars would be allowed to serve booze past the usual 2:30 a.m. cutoff time.

Republicans are likely hoping to celebrate a John Kasich nomination at the convention next summer — or at the very least, ensure a way to drown their sorrows. Either way, bars that apply for the special license will certainly have something to celebrate with all that added business.

The deal isn't just for Republicans — the provision would also allow late-night liquor sales in any Ohio city with a population greater than 350,000 during "major events" that last from one to 10 days and attract over 3,000 attendees.

Any bar seeking these extended service hours would need to apply for a waiver 120 days in advance.

This isn't the first time that liquor laws have been loosened, either — state lawmakers also approved a bill to allow "outdoor refreshment areas" exempt from Ohio's open container laws.