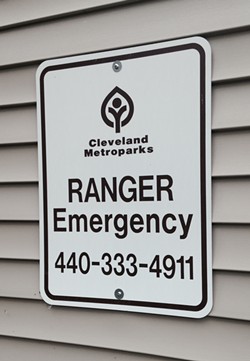 Cleveland City Councilman Mike Polensek and a small battalion of East Side residents attended Thursday morning's bi-weekly Metroparks board meeting to publicly register their outrage over a policy at Euclid Beach which prohibits all body contact with water.

Assorted TV media personnel, who rarely bother to cover the Metroparks unless there's a photo op at Merwin's Wharf or negligent parenting at the zoo, arrived en masse to document the confrontation.

Upshot: Despite impassioned comments and pleas for partnership (or at least reason) from beach goers, CMP Commissioners Dan Moore and Debbie Berry voted to uphold the no-body-contact policy and grant CEO Brian Zimmerman sweeping authority to close any areas he deems unsafe for swimming.

As board president Dan Moore dismissed Polensek and told residents that the meeting must go on, he emphasized the idea that in five or 10 years, Euclid Beach will be something that all residents can enjoy. He guaranteed that swimming would be available next summer.

Until then, he said, he's really hoping CEO Brian Zimmerman might be able to organize some sort of wading pool or "wading experience" to "bridge the gap."

Polensek's pissed, though. He issued an angry press release Wednesday in the wake of an arrest at Euclid Beach over the weekend.

Once more: an arrest.

A father and his daughter were strolling the beach when a park ranger confronted them and told the man he had to remove his daughter from the water. The Metroparks claimed the six-year-old girl was "thigh deep." The girl's mother, who attended Thursday's meeting, said her daughter was "ankle-deep," and that when she came home immediately following the incident, her pants weren't even wet. Nonetheless, the father, William Carol, Jr., who told the ranger to write him a ticket because he wasn't going to "remove his daughter" from the Lake Erie shallows, was handcuffed and charged with allowing unauthorized swimming and failure to comply.

So then in the press release yesterday — COUNCILMAN POLENSEK STRONGLY DISAGREES WITH METROPARKS DECISION TO DENY “BODY CONTACT WITH THE WATER” AT EUCLID AND VILLA ANGELA BEACHS (sic) — the outspoken Councilman took Metroparks leadership to task.

"This is outrageous,” Polensek said in the statement. “People and families have been enjoying the beach and lakefront in this community since 1796 and now in 2015 they are told they cannot even walk in the water! Get real! Metroparks’ Commissioners need to reverse this ridiculous decision and come up with a reasonable plan to ensure safe swimming and beach activities before there is a major altercation along the lakefront with Park Rangers.”

Polensek echoed those sentiments in public comments Thursday, calling the policy "Draconian" and, again, "outrageous."  He said that, especially given local tension between residents and law enforcement in recent months, the Metroparks was being downright irresponsible putting rangers in a position where they have to tell residents to stay out of the water on hot, humid days.

In one of the meeting's more comically surreal moments, Polensek repeated how ludicrous it was that residents without pools or country club memberships weren't permitted to touch the water at the only beach on the city's east side.

CMP Law Director Rose Fini interjected that the policy didn't say anything about "touching the water;" it prohibited "body contact with water."

Polensek, who was visibly shaking his head through the proceedings, inquired what the difference was. He kept inquiring until Fini (unfamiliar, it would seem, with the tenor of many Cleveland City Council meetings, asked for order).

"This is the community, Mr. Chairman," Polensek said to Dan Moore. "If you're going to do this, you may as well put a barbed-wire fence around the lakefront."

Moore did, in fact, say that the community should view the beach as a construction site for now.

A handful of residents spoke up, all of them arguing that they've been safely swimming at Euclid Beach and Villa Angela for years, and taking issue with media portrayals of the beaches as unsafe. One woman said that her elderly neighbor avidly collected beach glass and walked the shoreline three days per week — "You can't take that away from her," she said.

Polensek even implied that the only reason CMP found debris under the sand is because they went looking for it. He said that if he dug deep enough in his own backyard, he'd probably find some debris there as well.

From the Metroparks' perspective, safety is the top priority. Though Zimmerman gave the conversation a wide berth, Dan Moore said that the parks' primary mandate, like a doctor's, is to "do no harm."

Chief Planning and Design Officer Sean McDermott presented a slideshow that he presented at the last meeting which showed the evolving shoreline at Euclid Beach and Villa Angela. Because of the intermittent break wall, the beach has become "sloped and scalloped' to create an environment that's unsafe for swimming, he said. McDermott even played a video of himself, outfitted in yellow hazmattish suit that dive teams use, walking into the water to demonstrate a particularly steep drop-off.

McDermott said that the Metroparks has applied for a permit with the Army Corps of Engineers and estimated that once he's been given the green light, putting together a temporary swimming area might only take two weeks.

Metroparks Chief Marketing Officer Sanaa Julien later wrote Scene in an email that the permit would grant permission to remediate hazardous conditions which may include excavating the lake floor. (At this point, they're not sure how deep down the debris extends because they haven't been granted the permit, Julien said)

But Polensek's not buying it. He feels like he and the community have been led around by the nose — "First we were promised beach ambassadors. Then we were promised lifeguards," — and says it's the Metroparks responsibility to find a reasonable solution. He said he and the community want to be partners, but haven't felt like they've been included in any of the decisions related to Euclid Beach.

The merit of softball headlines over at Cleveland.com — "Metroparks may allow wading" vs. "Metroparks forbids all body contact on pain of criminal charges" — remains to be seen. (Probably just a difference of editorial opinion). But residents are extremely upset, and the park district's track record when it comes to community relations needs no rehashing from me.