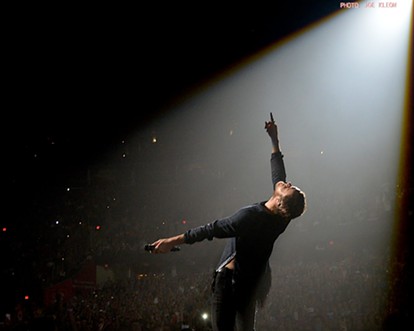 Imagine Dragons have no business playing a venue the size of Quicken Loans Arena. Sure, some of their songs have gotten into heavy rotation on commercial radio, but the Q has a capacity of about 20,000. Imagine Dragons ain't that popular. While the band didn’t fill the venue last night (the place looked to be about half full), the group showed that it’s plenty ready to play that size of venue. With a killer light show, an exuberant front man (the wiry, caffeinated, clad-in-black Dan Reynolds) and some tunes that lend themselves particularly well to sing-a-longs, the band came well-equipped to turn the joint inside out. You can see a slideshow of photos from the concert here.

The band made one heck of an entrance, too. As it emerged from behind a giant white curtain at the 90-minute show’s start, Reynolds sauntered up the catwalk to the center of the floor where seating was general admission. There, he slapped high fives with the patrons as he belted out the notes to “Shots,” which, with its upper register vocals, sounded a bit like a cross between 90125-era Yes and Coldplay.

Throughout the show, the band alternated between the giddy pop of the aforementioned “Shots” and the rootsy, Mumford-inspired rock of songs such as “It’s Time” and “I Bet My Life.” The group proved it could even get heavy, which it did on the bluesy “I’m So Sorry,” a song which found Reynolds sneering as he sang while his bandmates adding some pitch perfect call and response vocals. “Summer,” a song which benefited from a bit of ricocheting synthetic percussion, also showed how capably the band could rock. The attempt to lay down a heavy groove on “Gold” fell short of the mark, however, as the song suffered from a muddy mix. But that was the exception. The mix was consistently loud but seldom distorted.

For the finale, the band brought out an extra drum kit for Reynolds to hammer away at as he belted out the band’s big hit “Radioactive” while an array of red lasers made the stage look like something out of The Matrix. An energetic performer who at one point ran the length of the floor and ended up in the lower level of the concourse, Reynolds exuded positivity throughout the show. Even when he spoke about the recent shooting in Charleston during the show's one somber moment, he talked about how music has the power to bring people together and how we had the ability to overcome yet another terrible tragedy.

Canadian rock band Metric is also known for its high-energy performances but the band didn’t have enough stage presence to make last night’s opening set memorable. “Remember the Grog Shop,” said singer-guitarist Emily Haines at one point. Yes, we do. And we remember the band was much better in a club setting. Its atmospheric songs got punchier toward the end of its 30-minute set but ultimately didn’t really register with the audience.