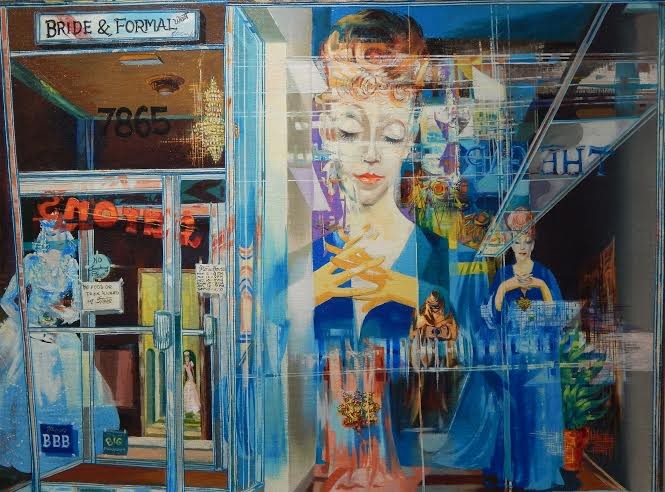 According to their mission statement, “ARTneo preserves, researches, collects, educates, exhibits and documents the significant visual art and architecture of the Northeast Ohio region that our community may learn and be inspired by its creative expression.”

This mission is at the heart of ARTneo’s latest exhibition, Fractured Planes, the second in its beautiful new home on the lower level of 78th Street Studios (Suite 016). Fractured Planes examines the historical narrative of geometric abstraction in our region, using works from ARTneo’s permanent collection created during the early twentieth century, as well as contemporary work on loan from artists currently living and working in Northeast Ohio.

Fractured Planes showcases more two dozen works spanning an astounding 100 years. Through the lineage (with help from thoughtful curating by ARTneo’s Curator and Collections Manager Christopher Richards), the exhibition explores common tendencies towards abstraction found throughout the past century of artwork produced throughout Northeast Ohio. Through the exhibition’s narrative, the works illustrate a continuous exploration of creative expression through visual abstraction.

“From Cubism and Futurism, to Op Art and hard-edge abstraction, the works illustrate how artists in Cleveland adapted and built upon innovative artistic concepts and formed a continuity of creative expression,” Fractured Planes curator Christopher Richards says. "Throughout the twentieth century and into the twenty-first, artists have continually turned to geometric abstraction to challenge our perception of the world around us. The visual language of geometry gives the artist the ability to construct and deconstruct reality, shattering preconceived notions."

Fractured Planes opens with a free reception from 5 to 9 p.m. Friday, July 17, as part of Third Friday at 78th Street Studios. The exhibition runs through Sept. 4. Additional viewing hours are available Wednesdays through Saturdays from noon to 5 p.m. (Thursdays until 8 p.m.) and next Third Friday, Aug. 21, from noon to 9 p.m.