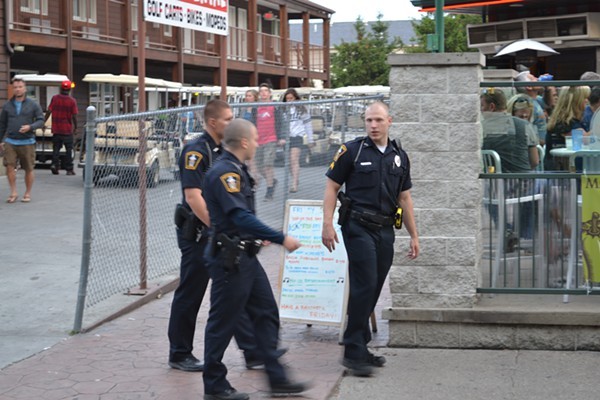 The Sandusky Register is reporting that Put-in-Bay Police Chief Robert "Ric" Lampela ignored incidents of drugging and rape within the ranks of his Lake Erie Island police force as far back as 2003.

Scene reporter Doug Brown wrote the story of rampant roofies at Put-in-Bay last year, but it turns out the alleged date-rapes of bar manager Chris Blessing in 2014 were neither isolated nor new.

Lampela, two federal lawsuits say, protected a PIB police officer who roofied two female cadets and raped them (on different occasions) 12 years ago. One lawsuit says that Lampela used his power to threaten one of the victims, saying he was the "God of Put-in-Bay" and could destroy her career if he wanted to.

According to the legal documents filed in the U.S. District Court of Toledo, Lampela called the victims "whores" and even went to one of their homes and held a gun to her head. His general stance, which he was reported to (dickishly) vocalize, was that two [women] didn't have the power to take down the department of which he was all-powerful dictator.

"Who do you think they will believe," he reportedly told one of the victims when confronted about the rape, "you or the chief of Police?"

The Register reports that the officer accused of the rapes left the police force many years ago. Lampela, for his part, was arrested in February on counts of aggravated menacing, falsification and dereliction of duty. He was suspended with pay in March. On Aug. 3, Put-in-Bay's village council will vote on whether or not he should be fired.

In the meantime, the gallant Register has renewed a public records request with Ohio Attorney General Mike DeWine, who has denied them documents they requested related to the investigation of Lampela and another officer.

"The Register contends DeWine is improperly withholding the records in violation of the spirit and intent of Ohio's Sunshine laws, designed to protect the integrity and to encourage release of public records," an updated Register story proclaimed Monday morning.