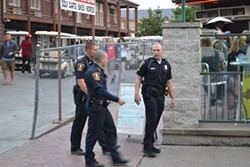 Lampela was placed on paid administrative leave in March after Attorney General Mike DeWine charged him with aggravated menacing, dereliction of duty and falsification, to say nothing of the pending lawsuits which allege that Lampela covered up rapes within his police force 12 years ago.

The Sandusky Register, who provided live updates during the course of Monday's mammoth hearing, said that Lampela was silent throughout the proceedings. Whenever he was asked a question, he "invoked his right to silence." His attorney Angelo Lonardo spoke for him:

"The chief has taken the position that this could waive his right to a fair proceeding," said the lawyer, who had delayed the hearing for weeks.

So Lampela certainly didn't comment on his alleged rape cover-ups. Nor did he comment on testimony from former employees and city officials, who described instances in which Lampela made others uncomfortable and tarnished the reputation of Put-in-Bay and its law enforcement.

Mayor Ruth Scarpelli was right on when she testified that image was important, and that "many people will only see an officer once here, and (Lampela's actions) would be my concern."

The self-proclaimed "God of Put-in-Bay" is a deity no more.