New Record Store in Fairlawn Set to Open in September 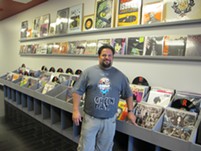 Jerrod Woll’s MacBook Air sits open on the counter of Hollow Bone Records (2721 West Market St., Fairlawn), the record store he’s prepping for an early September release. He scrolls through a series of photos taken by his friend, professional photographer Chris Felver — there’s a candid shot of country singer Willie Nelson and a picture of moody rocker Lou Reed, who has a big smile on his face. Woll selected a few of the images that Felver sent his way to be blown up into prints and framed.

The artwork represents just one unique feature of the store that will stock used and new vinyl and cater to the discriminating record collector.

Woll says he began thinking about opening a record store some ten years ago. At the time, he was living in Chicago. He had a chance to buy Sound Booth, a record store that focused on jam bands and stocked Phish and Grateful Dead bootlegs. But he was working for the family business in the plastics industry and wasn’t ready for a change of pace.

“I sometimes think I should have done that,” he says.

After moving back to the Akron area nine years ago, he continued to work for the family business. His father sold the business in 2013. He stuck with the business for about 18 months.

“I wanted to give it a try and see what big business was like,” he says, adding that it’s taken him about a year to find the spot in the Fairlawn strip mall that will become Hollow Bone. It used to be a women’s accessory store that sold handbags and jewelry. “They were nice people but I didn’t want to look back and see that I spent 20 years peddling plastic. It just wasn’t for me.”

Stocked with new and reissued vinyl releases from a wide range of acts (including the hip-hop act De La Soul and post-punk rockers the Replacements), the store’s bins are now nearly full.

“I’ve been bringing vinyl in since the first of July,” he says. “It’s been so much fun to order records. This is all about the vinyl culture. The CD market is done. Everything has gone digital. When you buy a record now, they throw the CD in it for free. With almost every Black Keys album that you get on vinyl, the CD just comes with it. There’s something about opening up the vinyl album and reading the lyrics and liner notes and seeing who played on the album. It provides an education about the music. Having an art background, I love the artwork.”

“I wanted to find unique products made out of vinyl that represent music culture,” he says. “I wanted to find products I don’t see in this area. I’ve been collecting music my whole life. I’ve been to record stores all around the country. If I traveled for work, I went to a record store. Vintage Vinyl in St. Louis is one of my favorites. Electric Fetus in Minneapolis — I like what they do.”

He’s built a small stage at the back of the store so that national and local acts will be able to perform in the store.

“I want this to be a place where people can come in with an acoustic guitar and do a one hour session on a Friday or Saturday night,” he says. “I like the idea of trying to get some open mics happening here once or twice a month. I want it to be a cool place to hang out. [Singer-songwriter] Frank Turner is touring record stores this fall. If he came here and played, that would be a dream. That’s the kind of thing that I would love. My wife and I have seen so many cool shows, I love that idea of seeing something in an intimate setting. I used to go to a place the size of my store here and see [Wilco singer-guitarist] Jeff Tweedy playing acoustic guitar and harmonica. There’s something really cool about that.”

The place will be wired for sound and for TV. A big fan of music documentaries, Woll says he’s hope to show videos while the store is open.

“I will sell DVDs, but they need to be music related,” he says.

Woll says opening the small store will be a dream come true.

“I turned in my laptop and cell phone yesterday and wrote on Facebook, ‘A new adventure begins,” he says. “I’ll be honest. I couldn’t stop smiling. I think I’m smart enough to make this successful but you have to wake up in the morning and be excited about what you do. You have to follow your dreams and take some risks and you’re passionate about something like I am about music and records in general, why not take that risk?”