Screaming Teens Pack the Q for 5 Seconds of Summer Concert 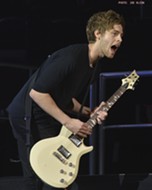 Though it didn’t hurt the Beatles any, playing to a roomful of screaming teenagers probably isn’t the best way to hone your musical chops. The guys in 5 Seconds of Summer, who performed last night at Quicken Loans Arena in front of a crowd of about 13,000 enthusiastic teens, have an advantage in that their fans don’t seem to mind if the vocal harmonies are a bit off (which they were) or if the songs tend to sound the same (which they did). Last night, fans were so excited to see the four handsome dudes from Australia that they cheered every move they made, even if there were a few blunders along the way. You can see a slideshow of photos from the concert here.

After serving as One Direction’s opening act, 5 Seconds of Summer now finds itself as headliners. They’ve transitioned smoothly into that role as the giant stage gave them ample room to roam and a huge video screen projected supersized images of them as they played. They're plenty ready to rock arenas on their own. Hard-hitting drummer Ashton Irwin sat on a drummer riser that regularly went up and down for the course of the concert, lifting him and a few amps up about a story or so above the stage. And flickering lights pulsated along with the music, a pop-punk confection that comes off as a lighter version of Fall Out Boy.

Despite resorting to every arena rock concert cliché — “who came here to party?” singer-guitarist Luke Hemmings asked at one point — the guys came off as rather down-to-earth and charming and even joked with one another on occasion as they referenced their jet setting lifestyle (they were just in New York early yesterday morning for a TV appearance). But as they try to write songs that are more pop than punk, they’re struggling to leave the PG world behind for something that’s at least PG-13 if not R-rated. It's something they’ll potentially have to do as their young audience ages. But at this stage in the band's career, it simply appeals to tweens and teens and if you didn't fall in that age group, the band’s show last night offered little of substance.

Right from the start, Hemmings voice sounded thin as the sang the opening number “End Up Here” and when members tried to harmonize in songs such as “Out of My Limit” and “Voodoo Doll,” they struggled. Trite love songs such as “Wrapped Around Your Finger” and “Everything I Didn’t Say” didn’t resonate. A beefy bass riff drove the heavier tune “Rejects,” one of the show's highlights, and the group sounded sharp on a cover of Green Day’s “American Idiot” that captured the angst of the original.

“She’s Kinda Hot,” a song from the band’s forthcoming studio that’s due out in October, also had a sharper edge to it and found the band altering its sound a bit so that the song didn’t follow the same predictable chord structure as the other songs in the 90-minute set. Maybe 5 Seconds of Summer’s 15 minutes of fame aren’t about to expire just yet.