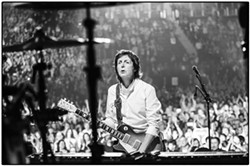 Former Beatle Paul McCartney played to a huge crowd at this year’s Lollapalooza and thrilled the audience that numbered in the tens of thousands. Now, the singer-multi-instrumentalist has added more North American tour dates. He's slated to return to Columbus for the first time in nearly 10 years as he brings his Out There Tour to town. He performs at Nationwide Arena on October 13. The Out There tour features music from McCartney’s entire career, and the set list includes material from his most recent studio album, NEW.