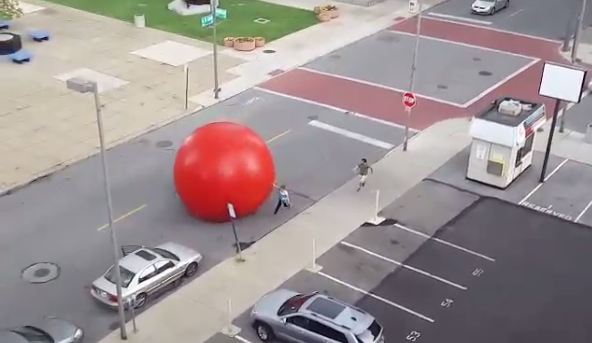 Instagrammer Jeremy419 caught a piece of social media gold last week when he witnessed and recorded a 250-pound Toledo Museum of Art installation come loose from fastenings and begin to roll through city streets.

The over-sized red ball was knocked free from its temporary home between Roulet Jewelers and Ice Restaurant in downtown Toledo after a thunderstorm on Wednesday, ABCNews reports.

"It started pouring rain, so the ball was wet and slippery," Kelly Garrow, the museum's director of communications, told ABC News' Avianne Tan. "The wind picked up, and it popped up and just started going. You can see in the video that's going viral that it rolled about halfway down a block and then mysteriously took a left-hand turn. It made its way partially down the street before people caught up with it."

The ball, which is made of the same soft material as a rubber water raft, passed over several parked cars before chasers caught up to the installation and safely deflated it.

Watch it all unfold below: