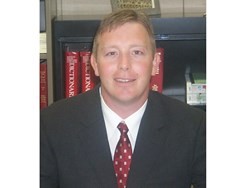 But even after the hard-nosed investigative sleuthing of the Fox 8 I-team, we here at Scene couldn’t speculate where the 48-year-old Keenan was getting blasted Saturday night. He was stopped at 6:53 a.m. on State Route 334 (Western Ohio, between Columbus and Dayton), according to reports, by the Lisbon Post of the Ohio State Highway Patrol.

He was scheduled to appear in Columbiana County Municipal Court (Eastern Ohio, where Lisbon is the County seat), Tuesday morning.

Maple Heights’ School Board members were naturally distraught, but issued no comment other than to say that they’d be gathering more information.

Keenan, meanwhile, is no doubt kicking himself as he reflects on the irony of his lately publicized Vision Statement for the 2015 academic year, a vision statement designed to "drive the actions of all adults who work with our students": Educating Our Students, through Expectations of Excellence, to Prepare Them for a Lifetime of Success.