Echo & The Bunnymen Deliver Career-Spanning Set at House of Blues 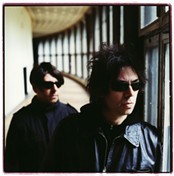 Last night at House of Blues, post-punk pioneers Echo & The Bunnymen exceeded expectations as they seethed and smoldered their way through a career-spanning set. Both casual fans and loyalists alike had much to love: The night opened with a string of dark post-punk cuts: a midnight-spooky “Crocodiles” replete with coyote howls from frontman Ian McCulloch; the organ-swirled, dynamic “Rescue”; and a surging “Villiers Terrace” featuring a coda of the Doors’ “Roadhouse Blues.” Later, the band touched on its more keyboard-heavy ’80s work, with a chiming, chirpy “Seven Seas” and a sizzling, jazzy version of “Bedbegs & Ballyhoo” full of glassy synth shards. More recent work, such as the title track from the band’s 2014 album Meteorites (introduced by McCulloch as “This is a fairly new one”) and “Constantinople” (“This is another new one-ish”), even fared well.

McCulloch—who, as per usual, spent much of the show bathed in dim light that often wavered into total darkness—was joined by his long-time foil, guitarist Will Sergeant, and an additional four musicians. He barely interacted with any of them, save for the occasional nod to Sergeant during a particularly impressive solo. At times, this lack of camaraderie was off-putting; it made the concert feel a bit like very competent Echo & the Bunnymen karaoke.

However, that’s not a knock on any of the musicians, especially Sergeant, who remains one of the U.K.’s most nimble and underrated players. His scrambled guitar throughout “Never Stop” and sneering electric roars on “All That Jazz” ensured both songs were standouts. Current drummer Nick Kilroe was the band’s other secret weapon, a powerful player who added the requisite force to the rhythm-heavy highlight “All My Colours (Zimbo)” and kept things brisk on “Never Stop” and the band’s shadowy cover of the Doors’ “People Are Strange.”

Admittedly, McCulloch’s voice isn’t as powerful as it once was, and possesses a raspier timbre, which hobbled the Pretty In Pink soundtrack staple “Bring On The Dancing Horses” (most of which he had the crowd sing) and robbed “The Killing Moon” of its feral power. His impish, boastful side remained intact, however: “This is another classic,” he announced at one point, but didn’t specify which song, leaving the crowd to call out song titles. “No, not that one,” he said after a wrong one. “No, not that one,” he noted after another misstep. (For the record, the song he was referring to was “Over The Wall”—and last night it was a rather incredible apocalyptic rumble.)

And McCulloch positively came alive for the end of the main set, which ended with him spitting and howling through a triumphant version of “The Cutter” that spurred an equally robust crowd sing-along. This spark bled into the first encore, which began with a touching “Nothing Lasts Forever” that segued into a generous portion of Lou Reed’s “Walk On The Wild Side”—complete with a cheeky call of “Hey Cleveland, take a walk on the wild side”—and snippets of the Beatles’ “Don’t Let Me Down” and Wilson Pickett’s “In The Midnight Hour.” The history lessons continued during a similarly extended take on the hit “Lips Like Sugar,” which featured plenty of microphone reverb and the chorus of David Bowie’s "Rock 'N Roll With Me."

The second encore began with an absolutely smoking, roaring version of “Do It Clean,” complete with taut riffs and a segue into James Brown’s “Sex Machine.” This song especially channeled the spirit and vigor of the young and scrappy Bunnymen, which made the traditional night-ending performance of “Ocean Rain” just a little more poignant—and even more satisfying.