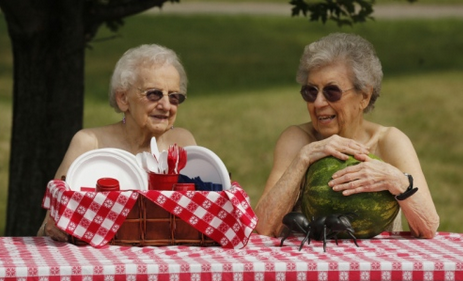 Earlier this year, we told you about the residents of Barberton's Pleasant Pointe Assisted Living who stripped down and posed for a 2015 calendar to benefit a local Kiwanis club.

Turns out, calendar sales brought in nearly $9,000, all of which was donated to Kiwanis for the Esther Ryan Shoe Fund which provides shoes to children in need attending Barberton City Schools.

This week, the Akron Beacon Journal's Kim Hone-McMahan reports the seniors are at it again and are already shooting for the 2016 edition.

Some of the seniors featured in the 2015 calendar jumped at the chance to do it again. After all, how many of us can say we’ve been a centerfold?

When the story of the 2015 calendar went viral, wire services, the Washington Post, U.S. News & World Report and the Huffington Post took notice. The models were interviewed on television and autographed calendars.

During a visit to a restaurant, someone told [95-year old resident Wilma] Purvis, who was in this year’s calendar with her late sister, Norma Elfrink, that he recognized her.


The 2016 calendars are expected to be out sometime in November and will set buyers back $12 if picked up and $14 if mailed out. Pre-orders can be made by emailing pointe@neo.rr.com.

Head over to ABJ for more photos from the shoot.