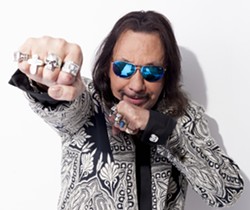 When we went looking for the Spaceman, we found him in Green Bay, Wisconsin, believe it or not. That’s where former KISS guitarist Ace Frehley was on Tuesday afternoon when we caught up with him via phone for a brief conversation. He comes to Northeast Ohio on Saturday night to perform at Hard Rock Live.

Space Invader, Frehley’s latest solo album, continues the successful comeback story for the 64-year old veteran guitarist who scored a Top 10 debut on the Billboard charts when the album was released last year in August. The chart debut added another milestone to Frehley’s career, as he became the first KISS member to have an album debut in the Top 10 as a solo artist. Anomaly, his previous solo album, released in 2009, peaked at #26 on the album charts.

The artwork for Space Invader came from Ken Kelly — well-known in the KISS universe for creating the cover art for the classic Love Gun and Destroyer albums. Frehley had been keen to have Kelly work on art for one of his projects and he finally got his wish with the new album and he says that the space theme that populates some of the material on the record began to take shape as he was in the midst of discussing album art ideas with Kelly.

“It kind of started up with the cover idea,” he says. “I wanted to get Ken Kelly to paint something and then we figured that [it should have] me coming out of the spaceship and it just snowballed from there.”

Frehley assembled the bulk of the album in less than a year, writing 11 songs in the process, something that demonstrated that he still had creative mojo that he thought he might have lost.

“You get to a certain age and you just think that sometimes you can’t recapture some of the things that you had in your youth,” he says. “One of the comments that I got a lot on this last record was that my voice still sounds like it did in my twenties, which is kind of funny, you know? Sobriety,” he adds, “has really helped me focus and be more creative. It was kind of fun towards the end as the songs started falling into place and we got really hot on the space theme. ‘Space Invader’ was the last song that I wrote for the record and it just kind of came together during the mixing process [which] was a big surprise and a nice surprise.”

Guitarist Richie Scarlet, a longtime former associate, is back in the fold, touring with Frehley for the first time since the ‘90s, one of several changes that Frehley made to retool his touring band. “I gave Richie a call last year when we went out in November, because I decided to replace my old guitar player, Todd [Youth] and it was the same thing with my old bass player, Anthony [Esposito], who I replaced with Chris Wyse, who used to play bass for the Cult,” he says. “So we had two [new] people and I also got back my old drummer, Scot Coogan, so it was nice and the chemistry is really good onstage. I think by far, this is probably the best live band I’ve ever assembled. I’ve known Richie forever, so we just trade off licks at the end of a couple of songs and nothing’s rehearsed. It’s all impromptu. It’s nice to be able to do that, you know? You can play outside of the box a little bit.

The Rocksino show will feature a diverse setlist featuring material from Space Invader, plus a good number of tracks spanning his entire solo career and a healthy selection of KISS favorites. Frehley admits that it’s tough putting the set lists together.

Frehley has a few projects on deck, including an upcoming covers album that will trace his early influences, tentatively featuring his version of songs from Led Zeppelin, the Who, the Rolling Stones and others.

“We’ve got most of the songs tracked already,” he says. “I’m just finishing up some overdubs and doing some rough mixes and then I think they’re planning to release it in the spring, so we’re on schedule with that. The most exciting thing with that record has been getting Slash in the studio and trading off on a Thin Lizzy song. We did ‘Emerald’ [from Thin Lizzy’s 1976 Jailbreak album] and we did an extended solo section that gave us a lot of leeway to just kind of go off and get crazy and we did.”

He’s working to finish the material and then he says he’ll look at potentially inviting some additional guests to play on the album. One name that has been mentioned is Gene Simmons, and Frehley says it’s still something that he’d like to pursue.

“If I can coordinate my schedule with his schedule,” he adds. “You know, he’s always running around doing this, that and the other thing.”

Looking back on the band’s 2014 induction into the Rock and Roll Hall of Fame, Frehley calls it a “great night.”

“I had a lot of fun and giving the acceptance speech was a gas and doing all of the press backstage,” he says. “You know, my only regret was that we didn’t perform and it’s unfortunate, because me and Peter [Criss] really wanted to perform and as you probably know, Paul [Stanley] and Gene decided not to perform with us.”

But he still retains lots of fond memories of his glory years with the band, including the experience of recording the group’s landmark Alive live album, which remains a fan favorite to this day and one which Rolling Stone recently placed high on their list of the Top 50 Classic Live Albums.

“You know, when I think about KISS Alive, I think about the live performances, but I also think about [being in the] studio with Eddie Kramer, doing overdubs to try to clean it up a little,” Frehley says with a hearty laugh. “He had these crazy mic stands with long tape loops, you know, it was before digital equipment, so everything was on tape and we’d have these long tape loops with different audience sounds, so on and so forth. It was pretty wacky. But we had a lot of fun doing it. It was one of the highlights of my career, working with Eddie and doing something that crazy. You know, the packaging was right, the timing was right and it’s still one of our biggest records to date, if not our biggest. KISS is known for our live show and our theatrics and the Alive record captured that. It captured the explosions and the crowd response and all of the other mayhem that went along with the rock and roll circus that we presented in the ‘70s. I think that’s why it was so well-received.”

After the current tour and working to complete the upcoming covers album, Frehley has no shortage of things on his plate.

“I’m still writing original material and you know, I was just offered another studio album deal so I’m probably going to pick up that option and I’m always planning ahead,” he says. “I’d like to do a soundtrack for a film. I just got offered a tour in South America, which I’m probably going to fine tune and do next year. We’ve got a cruise happening in mid-January of 2016, the Rock Legends Cruise. That’s going to happen January 15th. It’s good to be busy and stay active. I don’t know many years I’m going to have at this, but you know, so far, so good.”