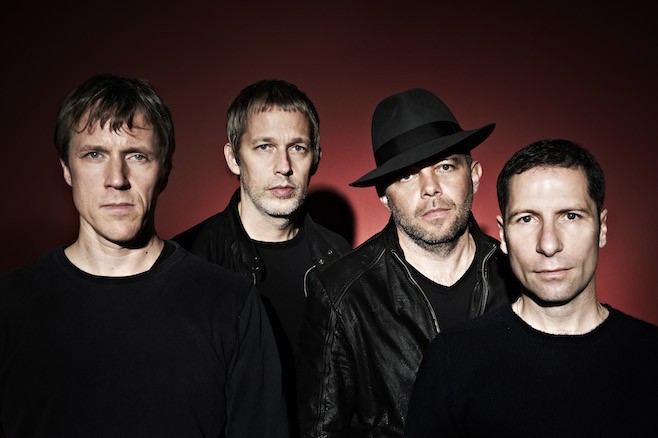 The modern surge of interest in the late-’80s/early-’90s U.K. shoegaze movement has been a particular boon for Ride. During their heyday, the Oxford, England, quartet was a sterling example of how musicians could twist and contort the genre around modern and retro influences. Ride’s music nodded to garage rock, Byrdsian jangle, the Beach Boys and the British Invasion; these inspirations in turn then collided with vortexes of distortion, tornadic guitars and hints of psychedelic electro droning. As a result, the band’s first two Creation Records albums, 1990’s Nowhere and 1992’s Going Blank Again, are stone-cold classics featuring indelible songs — the burnt-out jangle-pop of “Taste” and “Twisterella”; the skyscraping, sticky haze of “Dreams Burn Down”; the grinding noise rocker “Leave Them All Behind”; and the wistful, string-aided “Vapour Trail.”

Thanks to Ride’s U.S. record deal with Sire, the band toured the States several times in the early ’90s, most notably with fellow shoegazers Lush and Slowdive. One of these long-ago treks provided singer-guitarist Mark Gardener with a rather indelible memory, thanks to an incident that just so happened to take place right here in Cleveland. “We had a bit of a strange night after the show,” he recalls today. “The show was amazing, but then we went to some club and it all went a bit strange from what I remember. We ended up being driven at high speeds back to the bus at early hours in the morning, thinking we were all gonna die because some of us got a little bit crazy, basically.”

Gardener can laugh about the memory now, perhaps because he and the rest of Ride — singer-guitarist Andy Bell, bassist Steve Queralt and drummer Loz Colbert — survived intact and are returning to Cleveland on Oct. 2 at House of Blues, as part of their first big North American tour since announcing a reunion late last year. That they’re returning to the city at all is something of a miracle, however: After their initial burst of popularity, Ride released two subpar follow-up albums, and splintered amid creative acrimony and disagreements in 1996.

In the years after the split, the band members kept quite busy. Bell was in the band Hurricane No. 1, joined Oasis and, later, played in Liam Gallagher’s other band, Beady Eye. Colbert, meanwhile, drummed for acts like the Jesus and Mary Chain and Supergrass, while Gardener honed his production skills and embarked on a solo career. Only Queralt left the music industry to do other things. “Lots of cycling and, from what we can work out, some sort of dealing with Italian furniture,” Gardener clarifies, before adding with a laugh: “But Steve’s a man of mystery, so we’ll never quite know.”

Throughout much of this time, the members of Ride were adamant that the band wouldn’t reunite (save for a one-off 2001 TV performance for a Sonic Youth special). Still, Gardener was cognizant that fans and festivals desperately wanted to see a comeback — and, perhaps more important, also saw that Ride’s legacy had increased to mythic proportions. “[Ride] just seemed to grow and grow in our absence,” Gardener says. “The songs have grown and carried on. So that’s always been alive, but then it just needed us to reconnect with what was going on.”

Yet after the band’s anti-reunion stance finally softened, the challenge then became aligning everyone’s schedules. Still, that hurdle proved easier than expected when Gallagher broke up Beady Eye in October 2014, which freed up Bell to commit to more activity with the reactivated Ride. The only downside? Gardener was finally ready to release a long-in-the-works collaboration album with Cocteau Twins’ Robin Guthrie, called Universal Road. (The full-length emerged in late March 2015.)

“Which wasn’t fantastic timing,” Gardener admits. “But you know, this is how it was. We were all pretty locked into different projects, but then as soon as we kind of said, ‘Let’s do it,’ then everything beautifully just started clearing the way, and then we could announce and lock ourselves into more shows. What was just maybe going to be a month of shows has now become a pretty much a year of shows.” He laughs. “In a way it’s strange, because it’s forces beyond our control. But I like it like that. We could plan this, but life has its own plans.”

That the Ride reunion has taken on an unexpected life of its own is an indication that things are going well. Chalk that up to maturity and perspective. “I think everyone appreciates and values it a hell of a lot more than we ever did, because it was all we knew back in the day, you know?” Gardener says. “We left art school; we got signed to Creation; and obviously it was our dreams coming true. But we didn’t really know anything different. And I think when you have time away from it, then you really learn to reevaluate and re-appreciate it.

“And because we’ve had distance on it, you now have a better perspective on it,” he continues. “We can pretty much now tap back into the way that we felt that we worked the best and were the strongest as a unit. And that’s sort of what Ride is: It’s four people really strong in their corners. This couldn’t ever happen if it wasn’t the original four, really, because that’s where that chemistry comes from, really.”

This chemistry was especially evident especially on the band’s debut, Nowhere, which is celebrating its 25th anniversary this October. (Accordingly, a deluxe reissue of the album, with an expanded track listing and a bonus DVD live performance from 1991, is due November 6.) Today, Gardener recalls a “lovely naïvete about what we were doing, but also quite a lot of darkness” around Nowhere’s recording and creating process. In part this is because the band members were quite young, and working through what he terms “all the usual firsts”: leaving home, heading to school, falling in love. However, recording in London’s Blackwing Studios, which formerly housed a church, also lent itself to a special atmosphere.

“Basically, we became nocturnal,” Gardener says. “What I really remember is that when we were coming into the studio, it was when everybody seemed to be going home from work in London. It was a weird feeling. We got completely out of sync and step with the rest of the world, but in a nice way. We did feel a bit like some sort of strange night owls working through the night. I think it colored the album.”

As for the possibility of new Ride music, Gardener is taking a wait-and-see attitude, because the band is preferring to focus on their current concert dates. Still, at the moment, there’s no sign of Ride Mach II ending. “I never really thought even back in our first incarnation that we were a career band in any way,” he says. “It all just felt pretty haphazard, and that’s kind of why we ended up crashing the car. So in a strange kind of way, it feels a bit like that again. It just seems to be the right time [to reunite], and for lots of reasons it’s come together. And it feels so good that it’s now got its own momentum back and, quite naturally, we’re feeling good about just keeping on going.”