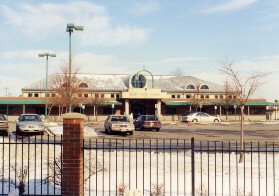 Councilman Mike Polensek may be ticked off about the health of his ward’s beaches, but he and Councilmen Kevin Conwell and Jeff Johnson — they of the “Northeast Neighborhoods Coalition” — have reason to celebrate: the dormant East Side Market in Glenville will reopen soon.

That’s the plan, at any rate.

City Council voted to lease the vacant property in the heart of historic Glenville (E. 105th and St. Clair) to Northeast Ohio Neighborhood Health Services (NEON) at the symbolic rate of $1 per year.

NEON runs health clinics in Cleveland and East Cleveland, and they’ll spearhead the renovation and development of the East Side Market property, which they expect to cost $3.5 million and create about 100 jobs.

Crain’s reported that Mazzulo’s Fresh Food Market has signed a letter of intent to anchor the facility, and the councilmen are thrilled, in part, because access to fresh produce and healthy food has been an ongoing problem for their constituents — the area is considered a “food desert.”

In addition to the grocery store, NEON plans to open a satellite health clinic there and renovate the exterior for an outdoor market during spring and summer. A cafe with patio seating and wi-fi may also be in the cards.

The state of the Ohio will subsidize $750,000 of the project through a capital grant, and the City of Cleveland will pony up $166,000. NEON will scrape together the remaining costs, and officials told Crain’s they wanted to ensure the project was self-sufficient.

In a press release after the legislation was passed earlier this month, the councilmen commented on how vital the East Side Market project is to them:

“Residents constantly tell me they need a grocery store close to home,” said Councilman Conwell. “We have worked hard to make that happen.”

Councilman Johnson stressed the importance of cooperation with his council colleagues.

“It was significantly important for Kevin, Mike and I to work together to bring an exciting and transformational project to the North East side of the city,” he said. “It will lead to more investment in the area.”

Jeff Johnson's ward headquarters are in the Glenville Plaza, adjacent to the East Side Market facility. He mentioned when Scene spoke with him there this summer that the East Side Market project was one of the things about which he was most excited, especially as he continues efforts to redevelop the St. Clair Corridor.