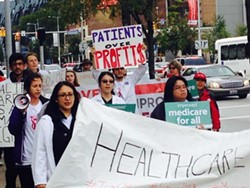 More than 30 universities participated nationwide in the #TenOne (October 1st) "Health Care for All" event. At Case, the Students for a National Health Program (SNaHP), hosted a march, speakers, and a candlelight vigil. They'd been planning the event since April.

Second-year Case medical student Vanessa Van Doren was one of the national organizers and helped put together the local event, which also commemorated the 50th Anniversary of Medicare.

"The Affordable Care Act is an improvement," she told Scene, "but there's still a lot to be done."

Van Doren mentioned that even with Obamacare, 30 million Americans are left uninsured, and that tens of thousands of people die every year due to a lack of medical care.

"Medical bills are the leading cause of bankruptcy in the U.S., and research shows nearly 80 percent of those declaring bankruptcy due to medical debt had insurance at the onset of their illness," read a SNaHP press release. "Our patients need and deserve better."

"Ultimately, we’re all here because we believe it is fundamentally wrong for some people to live shorter, sicker lives simply because they can’t afford medical care," Van Doren said in her speech. "Tens of thousands of people in the U.S. die every year because they don’t have access to life-saving care. This is indefensible, and it needs to stop."

Van Doren said the goal of the #TenOne national day of action was to bring awareness to America's failing health system and to raise the alarm, especially among medical students, about the necessity of single-payer health care reform.