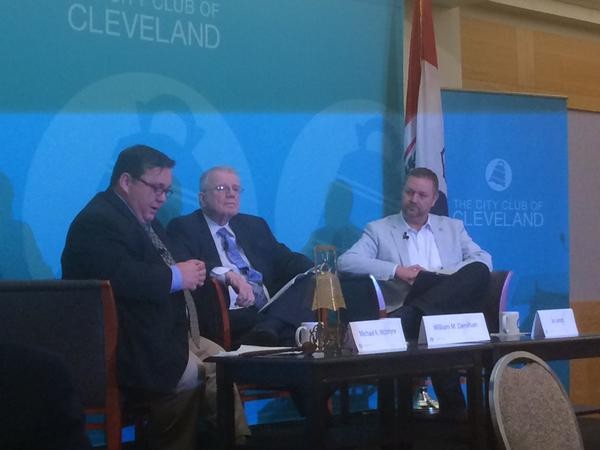 of Cleveland, as part of its Ohio Ballot Beat Series, hosted a conversation Monday afternoon between two prominent advocates on opposing sides of Issue 3, the measure that would legalize the sale of marijuana for medical and recreational use.

Both men articulated familiar arguments for and against marijuana legalization generally, and both provided persuasive statistics to suggest that their point of view was superior. James, a savvy campaigner, spoke strongly against an ineffectual state legislature, stating that Ohio has "epically failed" to reform marijuana laws since 1997, when it was first introduced to the general assembly.

He spoke also of the "cruel hoax" of decriminalization, saying that just because marijuana possession has been decriminalized doesn't mean that it's legal. You still receive a fine and lose your driver's license if you get caught "with a single joint in your pocket." James also cited the racial disparity of marijuana enforcement, saying that in Cuyahoga County, black people are six times more likely than white people to be arrested for marijuana possession. It's even worse in other parts of the state.

Denihan, talking largely from prepared notes, leaned on the expertise of the medical community. He said he wouldn't even support the legalization of medical marijuana until it was sanctioned by the FDA.  He said that in Colorado, where pot is legal for medical and personal use, DUIs for marijuana have increased drastically, as have school expulsions and hospital stays for marijuana-related issues.

"Our youth would benefit the most," Denihan said, when asked about who stood to lose or gain if the measure was not passed. "Their perception that marijuana is not harmful would become a reality. If we vote no, the benefit would be a greater understanding that it is harmful in the progression of individuals using drugs... Our kids emulate us. They do what we do and they're really good at it."

James responded that the only group who stood to benefit if Issue 3 did not pass was drug dealers. But if Issue 3 passed, "society" stood to gain the most. James said we'd use the $554 million in annual revenue to fund important issues like heroin treatment and infrastructure, and that law enforcement could spend their time on more pressing matters.

The Plain Dealer reported Sunday, however, that ResponsibleOhio has grossly overestimated the annual revenue figure. The Ohio Office of Management and Budget said that a fully functioning legal marijuana market might generate between $133 million and $293 million per year (all in tax revenue). The $554 million figure that ResponsibleOhio keeps touting comes from a study they commissioned themselves.

Still, the conversation lacked a meaningful discussion on the aspect of monopoly ownership. What makes marijuana legalization unique in Ohio is that marijuana growth will be limited to 10 facilities owned and operated by a monopoly — the same moneyed entities who are financing ResponsibleOhio.

The monopoly issue is why the Plain Dealer, for one, has endorsed a NO vote on Issue 3.

"Even if it is the inclination of the people of Ohio to legalize weed, giving ten business groups the exclusive right — as part of the Ohio Constitution — to grow cannabis in large volume is not the way to go about doing it," the editorial board wrote in August. "Encouraging competition with adequate oversight and regulation of the product and sales could, perhaps, be the better way. But even that should be preceded by the sort of open and honest discussion about marijuana legalization and its possible impacts that is being short-circuited by ResponsibleOhio's monetarily supercharged drive for the ballot."

When asked by a City Club audience member — "Why should we believe that 10 very wealthy people in Ohio that stand to benefit greatly would have the interest of the common people in mind?" — James conceded that yes, the ten entities bankrolling the initiative stood to make money if Issue 3 passed. But he said the reality is that this costs money, and when "the statehouse has literally refused to reform marijuana laws," someone else has to pay to get it done.