Confusion, No Sparks in 'Mothers and Sons' at the Beck Center 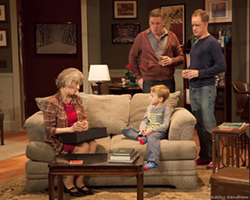 In the abstract, it would seem that Terrence McNally’s play about the mother of a deceased gay man confronting his former lover would have sparks flying. Unfortunately, this production of an enormously flawed script never generates anything but confusion and torpor.

For a playwright who has often written some absorbing works about gay relationships (Love! Valor! Compassion!, Kiss of the Spider Woman) along with very amusing pieces (The Ritz, Bad Habits), this play at the Beck Center, directed by the usually sure-handed Sarah May, has little feeling and virtually no humor. Instead, it seems like a forced march through the expected bullet points of a discussion about AIDS.

Set in present time, elderly Katharine, from Dallas, shows up at the doorstep of Cal, the former lover of her son Andre, who died decades before from complications of AIDS. There seems to be no event motivating her visit, but she displays a chip on her shoulder the size of the Chrysler Building as she awkwardly fences conversationally with Cal.

Turns out, Cal is now married to Will and they have a six-year-old son named Bud. Obviously well-to-do, money manager Cal and house-husband and aspiring writer Will have fashioned a cozy domestic nest in a high-rise apartment in New York City. But Katharine isn’t interested in any of that. For some reason, now is the time she needs to unload her homophobic rants and innuendoes on Cal and Will, blaming Cal in particular for “making her son gay” which led to his death.

Caught between his now idyllic life and this maternal maelstrom that blew in the door, Cal tries to tiptoe around issues and keep Will on an even keel. Trouble is, very little of this sounds particularly genuine. Bouncing from pleasant personal memories to vitriolic attacks to generic complaints about the changing gay zeitgeist, the play never finds a thread it can follow. And you begin to wonder why Cal, after initially bending over backwards to be polite, just doesn’t show nasty Katharine the door.

David Bugher does what he can with the often-nonsensical role of Cal, finding ways to clamber over McNally’s ungainly script and register some touching and believable moments. Scott Esposito as Will and Ian McLaughlin as Bud fill the spaces nicely as David’s family, with each of them providing the few chuckles this play allows.

But Catherine is the central figure here, and the talented performer Catherine Albers seems remarkably out of touch with that woman as a real character. Trembling for the entire 90 minutes like a just-struck tuning fork, constantly wringing her hands, twitching her mouth and tapping her feet, Albers’ Catherine seems continually on the verge of a breakdown or stroke. Using physicality to reflect a psychological state is effective, up to a point. But if Catherine had been doing this for decades, her body and mind would have long ago collapsed and she would be eating Jello under the gaze of a mental ward orderly.

As a result of these overwhelming physical tics and feints, we are never allowed to warm up to Catherine’s understandable plight: Seeing her beautiful son disappear into far-away New York and then die from a mysterious illness a few years later. Instead of seeing a part of ourselves in her, we are kept on the outside. And that’s not a good place to be when the subject is this emotionally volatile.