"Tearing Down the City to Save It?" Authors Respond

by Emily Rosenman and Samuel Walker 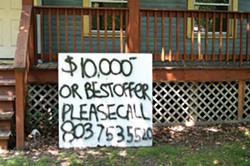 As authors of the academic journal article recently covered by Sam Allard in Scene Magazine, we first want to thank Mr. Allard and the many others who have contacted us who are interested in our research on Cleveland’s demolitions of vacant, foreclosed homes. Academic work does not always get this kind of exposure and we are grateful for the interest.

While we are not players in the local politics of Cleveland’s demolitions, we are urban scholars specializing in the sorts of processes seen in Cleveland – disinvestment, degrowth, and local attempts to respond to these processes. We write to clarify a few of our research findings for a more popular audience.

First, some background on the research. Though we are both now based at research institutions in Canada, Emily spent four years living in Northeast Ohio and Sam [Walker] is now working in Cleveland conducting research on another project. When we first read about the demolitions happening in Cleveland – over three years ago now – we were quite shocked at the scale of the process and wanted to understand why this phenomenon is so prevalent in Rust Belt cities. The goal of our article was to answer this question for Cleveland. Therefore, we are not immediately concerned with judging whether demolitions are the most effective response to the housing crisis and we view the support that many people have for demolitions as a rational response to how the national housing crisis is unfolding locally.

From a research perspective, we are interested in the City of Cleveland and the Cuyahoga County Land Bank came to use demolitions as a primary solution to the housing crisis. While home sales are recovering in Northeast Ohio, there were still 22,000 vacant houses in Cuyahoga County as of the last quarter of 2014. We wanted to go beyond understandings of demolition as simply ‘common sense’ knocking down of excess, dilapidated infrastructure. That is, we wanted to understand what forces are responsible for the socioeconomic conditions in which Cleveland now finds itself and how these forces limit the options of cities like it – and their local politicians – to find solutions. Our project is not to critique the motivations of individuals; by structural conditions, we mean we are interested in things like legal and economic constraints that narrow the possible actions that cities like Cleveland can take to address their local housing crises.

What we found in writing the article is that larger-scale processes like the federal government’s failure to hold banks accountable for the subprime mortgage crisis placed severe limitations on the actions that cities like Cleveland can take to deal with the aftermath. Within these limitations, local organizations like the Thriving Communities Institute and the Cuyahoga County Land Bank are trying to generate local and regional solutions.

In our view, requiring municipalities with falling tax bases to fund demolitions holds these municipalities accountable for a problem that has important national roots. This issue is especially relevant now that federal Neighborhood Stabilization Program money is no longer available. This problem goes beyond the recent housing crisis as well, as many of the deindustrialization policies encouraging industries to move out of industrial cities like Cleveland after World War II were supported by the federal government.

As for solutions, policymakers in Cleveland know better than we do what is politically and economically possible at the current juncture. However, one of the strengths of an academic analysis is bringing a perspective that is somewhat removed from local political debate. We see our role here as raising questions about policies like demolition that become replicated so quickly and on such a massive scale. For example, how have banks gained so much power in the housing market that thousands of homes can be foreclosed on, their residents evicted, and the houses themselves left to degrade (often while owned by lenders)? When we think about it this way, is this how we as urban residents want housing to be provisioned? Why not a right to housing?

This is a question that must be answered by Cleveland’s population as it decides which politicians to support. However, we see Cleveland as a cautionary example of what can happen when housing becomes seen more as a site of speculative investment than a form of shelter to which everyone should have a right. When the primary response to a housing crisis is demolition, which is focused on salvaging property values rather than justice for people who lost their homes due to racialized predatory lending practices and systemic urban disinvestment, perhaps our regional and national political priorities need to be rethought. While demolitions may be a rational local policy response, their use is ultimately limited unless regional and national problems of urban sprawl, municipal fragmentation, and a speculative financial system are addressed.