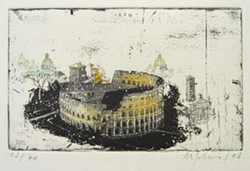 After their previous exhibition affectionately focused on “Cleveland Neighborhoods,” Harris Stanton Gallery’s Cleveland location expands its focus with its Second Annual International Exhibition. An opening reception takes place this Friday, Oct. 30, from 6 to 8:30 p.m., with a gallery talk with owner Meg Harris about midway through the opening.

The Annual International Exhibition has a long history at Harris Stanton Gallery’s Akron location. Owner Meg Harris’ frequent trips to Europe have created and developed many close relationships with artists and art dealers around the world.

The featured artist of the exhibition, Japanese printmaker Yuji Hiratsuka, combines the methods of chine collé, and intaglio etching to create humorous images which whimsically draw from the ancient and the contemporary to express “the mismatched combinations and hodgepodge which is Japanese daily life”. His figural works combine the traditional Japanese ukiyo-e style with the edginess of 21st century life.

“Japanese American artist Yuji Hiratsuka is influenced by current Japanese culture and the mix between the westernization of Japan with brands like McDonalds becoming popular over the past decades, while in other respects the country is still deep rooted in its own traditions,” Kaiser says. “He reflects this cross of cultures by mixing old Japanese ukiyo-e print making traditions and modern Western elements. The synthesis creates a completely original and witty commentary on contemporary Japanese life. Hiratsuka explains, ‘For example, Japanese gardens are cultivated high atop thirty story Western skyscrapers, or people dine on McDonald's hamburgers while watching Sumo Wrestling. In my work I explore this chaotic coexistence.’”