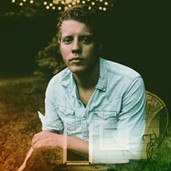 On one particular night at Nashville’s Bluebird Café, a place where singer-songwriters can nurture their crafts, singer-songwriter Anderson East threw back a few too many beers prior to getting on the stage and had to stop his performance for a bathroom break. Well, that’s one way to leave a lasting impression with the tastemakers often in the audience; the maneuver didn’t deter Dave Cobb, who was so impressed with East that he offered to produce his next album.

“I made it a little bit of a scene,” says East via phone from a Boise tour stop. “I had one or two too many Coors Lights and I stopped the show so I could take a restroom break and that made a memorable impression on [Cobb]. He introduced himself after the show and told me he was a producer. Pretty much everybody in Nashville is a producer, so I didn’t take it too heavily. I asked him who he was working with. He spouted off the names of some people I had never heard of. When he said he was about to finish Jason Isbell’s record, my ears perked up. I’ve been a fan of Jason’s for a long time. We took it from there. We geeked out about music and recording and the whole nine. We became friends through all of that.”

That partnership reaps dividends on East’s new album, Delilah, which came out earlier this year widespread acclaim on Low Country Sound/Elektra Records; it’s the first release on the new imprint run by Cobb. The retro-sounding album opener “Only You” features cooing backing vocals and a lively horn arrangement as East belts out the chorus, “I’ve been waiting so long.” It sets the tone for the songs that follow. The album’s single, “Satisfy Me,” sounds like a classic cut during the ’60s. It recently debuted at No. 28 on the AAA Radio chart. East has nurtured his soulful voice from an early age.

“I grew up in the church,” he says. “My granddad was a preacher. My mom was a piano player. My dad was a gospel singer and that kind of thing. I grew up with that gospel tradition. There was never too much of a pop music sensibility, at least in our house.”

All that would change when East, who recalls being 11 or 12 at the time, spotted a neighborhood kid whose older brother had a guitar.

“I just knew I needed one of those,” he says. “The rebellious teenager kicked in that just wanted to make noise. That happened, that progressed and I got more and more interested in it later. I got a four-track tape recorder and that’s where all my interest went. I was recording myself all the time. It all progressed from there, being able to make a good sounding record and play an instrument and write songs and sing. It all stems from that, from hearing something played back through the speaker.”

A performance at the grade school talent show convinced East that he needed to pursue singing and songwriting even further.

“I honestly don’t remember if we won,” East says with a laugh. “We won in our own minds if we didn’t win actually.”

East then moved to Nashville when he was 18. He initially worked with singer-songwriter Holly Williams and played with her for the next year-and-a-half or two years.

“It was a really great experience,” says East. “It was my first time getting to go out on the road and play music. She was incredibly sweet and let me open for her on a bunch of tours. I would play guitar for her and sing harmony too. It was a lot of fun—developing great friendships and getting to play great music and getting to see things I wouldn’t have seen otherwise. It was a really wonderful experience.”

Prior to Delilah, he self-released a few albums that established him as a significant talent. Those, in turn, led to the writing sessions for Delilah, an album whose title refers to the character from the Old Testament who stripped Samson of his powers.

“I don’t think there’s a narrative that each song ties together with a nice bow, but there’s some thematic things throughout,” he says. “Behind it all, it’s a record of wanting or longing for somebody. It started off with the tune ‘Devil in Me,’ which mentions Delilah. As I was playing it back, I thought all the songs tied into that story, not in a spiritual way but in a secular narrative. It seemed appropriate that a beautiful woman could bring down the strongest man in the world.”

Another highlight includes a cover of the George Jackson song, “Find ’Em, Fool ’Em and Forget ’Em.” East and Cobb dug through the vaults at FAME Studios in Muscle Shoals.

“I wanted to dig through some stuff they had around that nobody had ever heard,” he says. “They surprisingly said, ‘Yes. You can come and dig around.’ We were sitting upstairs with Rodney Hall. He played that tune of George’s. His dad Rick Hall wrote that song. He played it as a joke. I thought it was amazing. It was so groovy. And the lyrics are so backward. You think he’s a real sleazebag at the top of it. When the second verse rolls around, you realize he had his heart broken and is trying to put up his defense mechanisms. I thought it was good storytelling. It’s such a juxtaposition between where you start and where you end up. We went back down and it’s the last song we recorded. Hopefully we did it some justice. It sure is a lot of fun to play.”

For the current tour, East has a horn section in tow. He says the new material calls out for a horn section and being able to bring it on tour — a rarity these days — has been a real treat.

“It feels really nice to have that support and that color come through,” he says. “People come up to us after the show and tell us they’ve enjoyed the music and are connecting with it. You can spot people in the audience singing along. It’s a great feeling. Nobody told me it’s terrible so either they’re just being really polite or some people actually like it.”