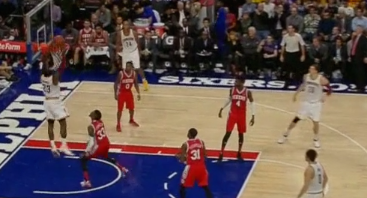 For seven to ten minutes, last night’s Sixers-Cavaliers game was kind of intriguing, which was a surprise in a game that otherwise went to script, as the Cavaliers mostly rolled to victory, despite the 107-100 score.

The tanking Sixers are like a vaudeville act, the ever-inebriated stumbling wreck. But after a timeout midway through the first quarter, Otis/Barney/Norm (Andy Griffith/Simpsons/Cheers) suddenly turned drunken master.

Over the rest of the quarter the Sixers made nine of ten shots, sucking down the Wine and Gold’s 15-11 lead, and spitting out a 32-18 deficit. The one shot they missed they grabbed the board and put it back in. You could spy the collective look on the Cavs’ face: “Whoda Whatta?”

Almost half their points came courtesy of Nerlens Noel who glimpsed his immense potential that had him looking less like a spidery long-limbed defensive-sort (Honey I Blew Up Corey Brewer!) and more like Anthony Davis. He’s so cat-like quick and agile in a slithery way reminiscent of Cedric “Cornbread” Maxwell.

Needless to say, Anderson Varejao and Timofey Mozgov had no luck with him. Even Thompson struggled.

It should be noted that this all happened shortly J.R. Smith left the game with an injury. (After an MRI, he was found to have quadriceps tendinitis and is out the next two games, and doubtful for Pacers game on Sunday.) That seemed to upset the rotation, and throw the team off. It didn’t help that the sequence features six missed jumpers, the only play at the rim a Thompson transition hoop.

The team contributed an uncharacteristic eight turnovers in the first quarter (and 16 for the game). For a team that has been pretty good with the ball so far this season that was disappointing. But it was all part of the lethargic way they came out of the locker room. That 21-3 run delivered the necessary wakeup call, though they didn’t necessarily jump out of bed.

After cutting the lead to ten in the first couple minutes, the Cavaliers were almost back where they started with two minutes left in the second, down 13. That’s when LeBron turned Chill Mode off. He began by hitting (taking?) a technical foul free throw (Defensives 3 Seconds), than assisting on hoops by three different players before scoring on his own.

The 10-2 run closed the lead to five and put the appropriate fear in the hearts of the Sixers. It was like they woke up next to a hot pop star, then walked into the locker room realizing they were Kevin Federline. [Cue the sad trombone.]

Whatever David Blatt said at halftime, it was effective. It took the Sixers almost six minutes to accumulate their fourth point, and they were already down six. It was ten by the end of the quarter and ballooned to twenty, before a nice run at the end made it look a little closer than it was at 107-100.

The big takeaway is that while the team played down to their opponents level, they were able to snap out of it. An important factor in that was Mo Williams, who is shaping up as a wily vet with a sure sense of the moment. His ability to pick and choose his spots has been one of the early highlights of the season, and hopefully an example Kyrie Irving can take somewhat to heart.

Williams finished with 21 points on just 10 shots. LeBron fell just a rebound short of a triple double, with 22 points, 11 assists, and 9 rebounds on 9-19 shooting. He continues to struggle with the three-ball, going 0-3 bringing his season tally to 3-23; it’s been three games since he made one. Otherwise he was scintillating.

Matthew Dellavedova also put in another strong performance with 9 asissts and 12 points on 5-8 shooting. Keep this up and he’ll definitely get paid next summer. (Varejao only played four minutes and looked completely outclassed by the Sixers athletic frontline. This is precisely why they signed Thompson.)

Still not a lot to see here. The team’s shown better continuity and consistency than most expected. The depth and pretty well-defined roles has allowed the team to pretty much pick up where they left off last season in terms of playing right and defending. They built a character in those playoffs that serves them now, particularly that second unit led by Delly and Thompson.

This string of six likely lottery-bound teams (Knicks twice, Sixers at home, Pacers, Jazz) will provide some rest and time to iron out what they’re doing.

There are a lot of things to be said on this matter but what it comes down to for me is keeping the Talk Radio aspect out. There’s plenty to discuss in this sport without idle speculation. That’s just our preference. Obviously lots of money is made discussing spurious nonsense on TMZ, and increasingly sports media seems to be moving in that direction.

We have no problem with a good rant – we enjoy opinionated commentary when it’s grounded in something. Such banter and back-and-forth is a big part of the sport. Yet, it’s easy to get sucked into the other side, gossiping about what might happen and not really telling anybody anything about anything.

The strange thing about this is that it’s happening at a time when common understanding of the sport has grown tremendously, just as it has for football. Analysts such as the Czar of the Telestrator, Mike Fratello and Dick Vitale on the college end, have helped make explaining the play of the game a part of the broadcast. How is it they’re shooting for an ever lower common denominator?

Whether or not the long tail exists, our philosophy is to flatter our audience not diminish it. The world needs more Modern Family, not Married With Children. We’ll miss sometimes, but we’d rather miss high than bore you to death with stuff you could probably find for yourself in the boxscore.

As for the subject of rumor mongering, let us say this: There’s money to be made in it, because there’s a service being done. That service isn’t necessarily on behalf of the reader. Just ask Judy Miller. Or Chris Broussard. In our many years of reporting we’ve noticed that when somebody knocks on your door with information, they usually have an agenda in their jacket pocket as well.

For example, who knows how much money Kevin Love left on the table when he opted to sign his 5-year extension with the Cavaliers without testing the market. But we’ll bet his agent could take a pretty good guess.

Would it behoove Love’s agent to tell every owner he talked to that the talent forward would be available? That’s just called market-making.

What if a reporter or two gets swept up in that – why, it just makes it more believable and helps spread the narrative. We have no idea if that really happened, just noting how everyone’s interests are enhanced by such behavior. This reporter is just repeating what people tell him – he has no control of the gossip market, and it makes him look better in the eyes of his audience and his peers.

Take a look at this chart. It’s the media coverage of Trump and the polls superimposed. Reporters like to believe the fiction that they just cover the story and aren’t part of it, but it’s often bullshit.

The problem is that while it’s suggested someone’s credibility suffers when they offer incorrect prognostications, it rarely does. It’s usually dismissed with an “it almost happened,” or “it was going that way then something changed.” A great excuse in any situation if you think about it, and that’s how they have it both ways.

They’re still credible, it’s just that something unlikely at the time wound up happened. Thing is they could very well be right. But if you’re going to traffic in rumors shouldn’t you suffer the sting of being wrong – or what value is one’s credibility on such things?

The obvious issue is that if everyone really actually worried about their credibility and didn’t report things that might hurt their reputation or upset the apple cart (even if they are carrying someone else’s water) we might somehow be less rich for it.

Either that or Adrian Wojnaroski and Marc Stein would be the only guys breaking news. (Not such a bad thing when you think about it.)

We’re simply not so sure it’s important we be better informed with questionable “facts” such that we can indulge in better, more accurate(?) barroom discussions of someone’s contract, firing or imminent departure. It certainly attracts clicks and attention, but it’s harvesting the wind.

Nothing usually comes of it, which makes it sort of a perpetual-motion machine, the perfect thing to fill a 24-7 sports new hole, which doesn’t have the privilege of leading with blood like TV news.

That said, a job is a job. Certainly the industry is hungry for that type of thing, and like listening to Nickelback, we’ll call you a fool for following, but that’s just our taste. Obviously somebody likes it.

Different tastes doesn’t mean you’re bad. Our wife has different view on politics – doesn’t make her bad. As musician Joe Henry once told us: “Everyone has a right to whatever size house they feel is most appropriate.”

It doesn’t make them wrong, or bad people. They just aren’t interested in living in the same neighborhood. Hell, if someone came porting a fat enough paycheck, we might even have to stop doing this how we like and do it how the man suggests.

In the meantime, we’ll keep trying to bring you a wry, intelligent alternative in our Cavaliers coverage. In that spirit, we’re happy to report we’ll be back to bringing you video and play breakdowns starting with the next game after some early season technical difficulties.

We’ll be at the Q for Wednesday’s game against the Knicks. You can follow our game reports on Twitter @CRS_1ne and read our analysis the next day here at Scene.