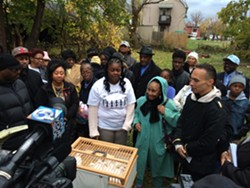 Six years have passed since the discovery of Anthony Sowell's crimes led to aftershocks of pain and tragedy in Cleveland's Mt. Pleasant neighborhood. VICE reporter Wilbert Cooper — a Strongsville native — returned to Cleveland to craft an hourlong documentary on the crimes and what has happened since.

The film premiered today on VICE. Watch it below.

Cooper's parents worked for the Cleveland Division of Police; his father grew up and worked in Mt. Pleasant. Since 2009, while Cooper was attending Ohio University, he has heard countless stories from his father about the homicide investigation that unearthed Sowell's evil activities.

"The process for me of coming back to the story wanting to tell it is connecting the dots that he laid out for me from the very beginning," Cooper says. "And [it involved] seeing how this story relates to some of the bigger systemic problems that we have, especially in terms of the black community and police."

Former Plain Dealer staffers like Stan Donaldson helped pave the way for the VICE reporting, which focuses in part on the police department’s sex crimes unit and missing persons unit. At issue to this day are staffing levels.

For instance, current reports list 16 officers in the sex crimes unit. There were 13 at the time of the Sowell investigation — a particularly noteworthy problem when discussing the department’s access to resources. There simply weren’t enough people on the force to manage the workload; by most accounts, there still aren’t. “There have been some improvements made within the Cleveland Police Department and on the law enforcement side, but it's probably not to the level that I think most of the citizens of Cleveland would like to see,” Cooper says.

Cooper connected with many of the families involved with the crimes and their aftermath — a tight-knit community of loved ones left with profound pain and unanswered questions. In the last scene of the film, Cooper joins some of the family members and listens to them describe the rippling aftermath in the years since the crimes were discovered.

“It's really hard for them to have to go back and tell these stories again," Cooper says. "That's a very, very painful thing. There was a time when they were forced to tell these stories again and again. And every writer and every journalist that came to talk to them said, you know, this is going to create something. And as we've seen, there hasn't been as much done as we need done. It took a lot to get them to open up and share those stories."

On Oct. 29, family members and friends of the Imperial Avenue victims gathered at the site of the tragedy. They shared prayers and news, and they released doves into the evening sky. The beginnings of a proper memorial had been laid on the lot, though promises remain unkept and ideas stagnate in time. ("That's still on the table," one man says, answering a question about the possibility of renaming Imperial Avenue.) As former homicide detective Mel Smith tells Cooper in the film: "Promises were made but not kept. But the truth of the matter is, promises are always made in the inner-city and not kept."

After prayer and song and a few hopeful statements, the small crowd disperses.

Cooper sums up the sentiment: “As the city has tried to forget the Sowell murders, back in Mt. Pleasant the victims and their families have been left with no recognition or support — a reminder of how little the city cares about what happened.”