Cleveland Spent $1.8 Million in Police Overtime Before and During Brelo Acquittal 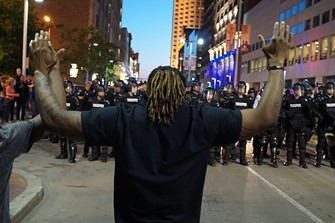 Leila Atassi, reporting for Cleveland.com, writes that city administrators now refer to the period leading up to Michael Brelo's acquittal as "the decision."

As it relates to police and city leadership, that decision appears to have connoted "deploying police resources" as needed, without regard for the budget.

In so doing, Cleveland police spent $1.8 million in overtime during the two pay periods encompassing the Brelo protests.


Finance Director Sharon Dumas told city council Monday that the typical overtime compensation during a standard pay period is about $396,000, but that ever since Brelo, it's been closer to $500,000. (Given the tensions of that time, $1.8 million actually doesn't seem too extreme, but still — the scope of these costs continue to widen).

On the night of Brelo's acquittal, police descended upon downtown in riot gear — resources deployed, indeed — and picked off 71 protesters who, other than a few minor skirmishes, had been peaceful.

That morning, Michael Brelo had been acquitted on two charges of manslaughter and one lesser charge of felonious assault. He was one of the officers who participated in the police chase of 2011, resulting in the deaths of Timothy Russell and Malissa Williams. Brelo is the guy who jumped on the hood of the car and unloaded his clip into the windshield.

The city now faces some serious arithmetic related to financing a police force already strapped for cash, and a city staring in the face millions of dollars of expenses in implementing the Consent Decree. At yesterday's hearing, council voted on an ordinance that will give police an additional $11.3 million to cover all that overtime (plus new pay raises, as explicated in new union contracts).

Zack Reed, who's been sounding the alarm about a lack of police presence on Cleveland's lately hyper-violent streets, has continually tried to get money from the city's rainy day fund into police hands. When he asked why his request to transfer $1 million earlier this year had been ignored by Mayor Frank Jackson, Dumas said $1 million dollars wouldn't cut it.

She said the city simply doesn't have the funds to increase police staffing levels.