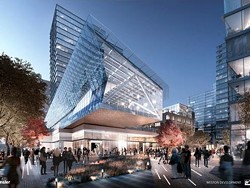 Weston Inc. publicly presented plans this morning for “one of the largest mixed-use developments in downtown Cleveland," though it's not like that's an empty playing field anymore.

The plan is to fill the parking-lot footprint that spans West 3rd to West 6th between Superior and St. Clair. A covered parking garage is part of the proposal, which features 3 million square feet that will include 1,200 high-end residential units (and a rooftop bar, deck and pool) and some 100,000 square feet of retail.

The first phase — and leasing opportunities — should be open by 2017.

“This is going to be the most exciting thing to happen in downtown Cleveland in a very long time; it’s what we’ve all been waiting for,” Weston CEO T.J. Asher said this morning.

A very long time, indeed. We certainly haven't been this excited about mixed-use development since the folks behind the Huntington building sale announced their plans in June. Before that, we'd have to go all the way back to November 2014 when the nuCLEus team laid out their downtown proposal. You can scoot back to 2013 and remind yourself of the excitement stirred by plans for the Ameritrust complex — "The 9," as we know it today. That was kind of a very long time ago.

Here's what the plot would look like in the future compared to the sea of asphalt that graces the 6 acres now.