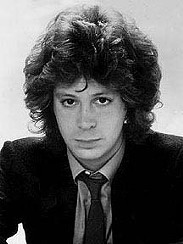 Cleveland.com reports that former Raspberries singer Eric Carmen has filed a lawsuit against his brother for mismanaging the trust that was created in 2007 for royalties that have accrued from both the Raspberries and from Carmen’s solo career. The Raspberries had a slew of pop hits and Carmen had a successful solo career in the wake of the band's dissolution — he had a big hit with the tune “All by Myself." Those royalties reportedly amount to a whopping $600,000 to $800,000 a year.

According to Cleveland.com, the complaint says that Fred Carmen "abused his position in acting in a pattern of mismanagement and self-dealing which has deprived the Trust of thousands of dollars and left the Trust in financial mess." The complaint cites Fred Carmen’s unauthorized withdrawals from the trust to pay attorney’s fees and make a donation to the the Scott Hamilton Charity. Probate Court Judge Anthony Russo will set a court date and oversee the family feud. Though he doesn’t regularly perform in town, Carmen currently lives in Northeast Ohio and often attends local events. We recently spotted him at the opening of the Graham Nash exhibit that took place last month at the Rock Hall.