You Green Boy: An Essay on the Flats 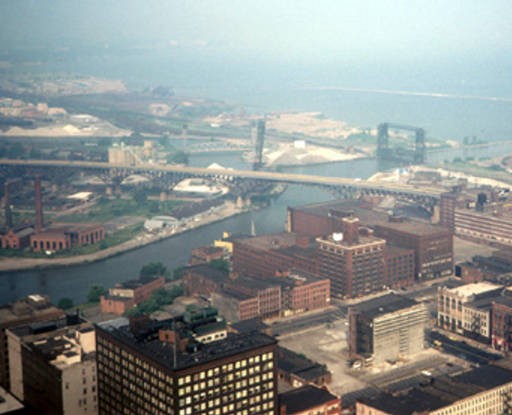 I worked in Cleveland’s Flats just as they were coming off their peak in the summer of ‘94. I’d just finished my sophomore year in college and didn’t have much of a plan, so I took a job as a busser and dishwasher at a white tablecloth restaurant called the Boat Club. On weekends, hordes descended on the half-mile strip of bars, restaurants and warehouses-come-nightclubs to party against the backdrop of the city skyline and boats chugging upriver.

This was my chance to drink, take home tons of money and party in downtown Cleveland, yet it didn’t work out that way. I barely had the chance to dirty my apron before hearing rumors that the Boat Club might close.

During my interview that spring, Mark, the owner, had played up the fact that Flats developer Jeff Jacobs and other heavy hitters were members there. Yet my first week of working there only about a third of the tables filled up by the 7 pm dinner rush, so obviously they weren’t coming often enough. Mark and his wife Diane holed up in their closet-sized office with the door closed, doing God-knows-what, and when they finally ventured out onto the floor, they’d stare across the sea of empty tables like the hosts of a failed dinner party. They sent me home at nine p.m.: the place was pretty much dead except for weekends.

My first night, a server named Janice with spiky, platinum-blonde hair came up and asked: “What’s your name, honey?” Her long, crimson nails could have cut a jugular.

I told her and she quipped, “I need four waters on seven, can ya handle that?” Then walked away carrying a tray of food like a beach ball on her shoulder.

My manager, Sue, saw me coming from a mile away – I was a college kid there for one summer, she was there to make a living – and liked busting my balls. Early on she saw me clearing a table a few dishes at a time, so she grabbed my elbow and showed me how to fill up a tray like I was a four year old. Then, on a Saturday afternoon when there was no one there except two guys at the bar, she saw me leaning up against the walls, so she made me get a bucket and scrub them. After that, I made sure I looked busy.

The servers, students working their way through college or restaurant veterans who’d worked a half dozen places, were equally skeptical. To prove myself, I moved faster than I ever had before, clearing tables as soon as people got up, bringing out salads before they even asked.

I ended each night with food under my fingernails, dishwater in my hair and a wad of bills in my pocket. I also lost 20 pounds that summer. I had no appetite after scraping plates all night.

Showing up at 4 pm was the perfect time to see the shift change in the Flats, as its daytime identity, a working neighborhood full of gravel trucks that shook the street right down to its cobblestones and freighters as big as city blocks, gave way to a nighttime personality of clubs blaring cheesy 90s pop music out into the street. The Flats were like an entertainment district superimposed on top of this dying 200-year-old neighborhood, and everywhere you went there were relics from the past – railroad tracks submerged beneath the concrete, bulkheads sliding into the river, stone pylons for old bridges.

In Cleveland, a city divided by its river between east and west, the Flats have always been a place where people from both sides of town came together. For years, it’s been sprinkled with shot-and-a-beer bars where factory workers went after their shifts. In the ‘70s, when Cleveland had sunk to its nadir and become a national joke, developers bought up old buildings and started turning them into nightclubs and restaurants. In the 80s, the Flats became our Miami Beach on the Cuyahoga, equal parts grit and glamour.

When my friends and I were in high school, it was the only place to go. We borrowed our parents’ cars to go to all-ages shows at Peabody’s, waiting in a line of cars to funnel down into the Flats, nosing down the hill towards the abandoned railroad bridge lit up by purple floodlights, the brick powerhouse that once ran the city’s trolley lines and now boasted an arcade, TGI Friday’s and Howl at the Moon dueling piano bar, and nightspots like Fagan’s, Club Coconuts and Shooters, all glittering like jewels amidst the rust.

I didn’t get to do much partying that summer – the bars all carded and I worked too late, anyway – but I became pretty good friends with Marc, a 35-year-old, balding pastry chef who also played the guitar. On long, slow afternoons we’d hole up in the men’s room and jam where Sue couldn’t find us.

I remember one time we he was trying to teach me a Rolling Stones song. I didn’t get it, asked him to show it to me one more time. He did, then burst out laughing as I tried to play it again and again, always a step behind.

By August, it was apparent that our little country club on the river was barely afloat. Jeff Jacobs came in once or twice, ordering a bottle of wine and leaving a fifty dollar tip, but he wasn’t exactly a regular. People were still coming down to the Flats, but the college kids, bikers and tattooed couples from Nowhere, Ohio on the boardwalk were more interested in Shooters $2 happy hour drinks and wet t-shirt contests than our $24 prime rib dinners.

The Boat Club’s head chef, Rich, drove me home sometimes. One day he pulled up to the curb outside my house, Led Zeppelin playing on 98.5 WNCX. We talked about the restaurant and our days off, and then I said something that reached past the soft lines of summer, indicating that we’d know each other past August. Rich just looked at me and scowled, then told me in so many words to go off and forget all about this place.

I took half his advice – I headed off for a year abroad at Oxford, yet as I went to lectures and studied at the library, my mind kept reeling back to the Boat Club. When I came home for winter break, it was already gone, a “for rent” sign in the window. The party in the Flats began winding down for good a few years later. In 2000, three people drowned in a single weekend, so the city set up a task force to deal with crime and safety issues. Eventually a developer, Bert Wolstein, bought up the east bank and vowed to rebuild it. Now it’s risen again, boasting new apartments, restaurants and clubs, with almost no trace of what was here before. The west bank has been redone too, with a new aquarium in the powerhouse and a music club where Club Coconuts used to be. Shooters is the only place that’s left from the old days.

As I walk along the new boardwalk past restaurant patios where they serve local organic cuisine, I think of when it was packed shoulder to shoulder with people just looking for cheap drinks. The river always looked so pretty at night, but when we got up close it hit us with a rotting, chemical smell, so we turned our backs on it, forgetting ourselves, forgetting our troubles on those endless summer nights.

Lee Chilcote is a freelance writer and editor who has written for Vanity Fair, Next City, Belt and other publications. He is cofounder of Literary Cleveland.