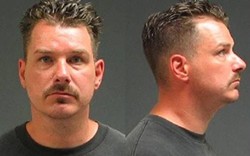 Paul Pelton, the Lorain man whose close-up cell phone footage of a car crash in July became a viral cause celebre, has pleaded guilty to fourth degree misdemeanor charges of vehicle trespass and disorderly conduct.

Additional felony charges of bribery and intimidation of a witness were dropped as part of a plea deal in Lorain Municipal Court Tuesday.

The July 13 crash involved two teenagers and resulted in the death of 17-year-old Cameron Friend. Pelton was accused of going to the home of the surviving driver, Zachary Goodin, in September and asking him to say Pelton had permission to open the car door on the night of the crash. The vehicle trespass charge hinges on entering a vehicle "without consent of the owner or driver." (Goodin was dazed and essentially nonverbal at the time, however.)

In exchange, Pelton said he'd testify that Lorain police officers caused further injuries to Cameron Friend when they removed his body from the vehicle.

Zachary Goodin was charged in November with aggravated vehicular homicide. Lorain investigators determined that he was traveling well over the 25 mph speed limit and accelerated to jump the train tracks on Kansas Ave. When the car landed on the other side, Goodin lost control.

Pelton will be sentenced on January 13. He is now represented by two attorneys from Cleveland firm McCarthy, Lebit, Crystal & Liffman Co., LPA. He parted ways with his prior attorney. R.J. Budway, several weeks ago.

Pelton told Scene he wouldn't comment until after his sentencing — the vehicle trespass charge carries a maximum $250 fine and 30 days in jail — but has held that he's been unfairly treated from the getgo, not the least of which unfair treatment came at the hands of local media, who vilified Pelton with misinformation that has yet to be corrected.