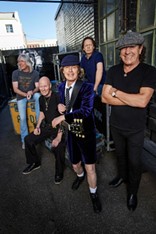 Earlier this year, singer Brian Johnson had to leave the U.S. tour after being advised by doctors that he risked total hearing loss if he continued to perform live. The group continued to tour with Rose handling lead vocals.

"This band has got a ton of energy and you're going to see a fusion of all that terrific chemistry that we have felt ever since rehearsals in Lisbon," says Angus Young in a  press release. "I want to get back out there onstage in the US with these guys so our audience can see and feel it too."

***
Quicken Loans Arena ard rockers AC/DC have just announced the North American dates for their "Rock or Bust" World Tour. The tour kicks off on Feb. 2 in Tacoma at the Tacoma Dome and runs through April 4, when it concludes at New York's Madison Square Garden. The group is slated to perform at the Q on March 26. Tickets go on sale at 10 a.m. on Friday. You can buy tickets at the Quicken Loans Arena Box Office, online at theqarena.com and livenation.com or by phone at 888-894-9424. For more information visit ACDC.com