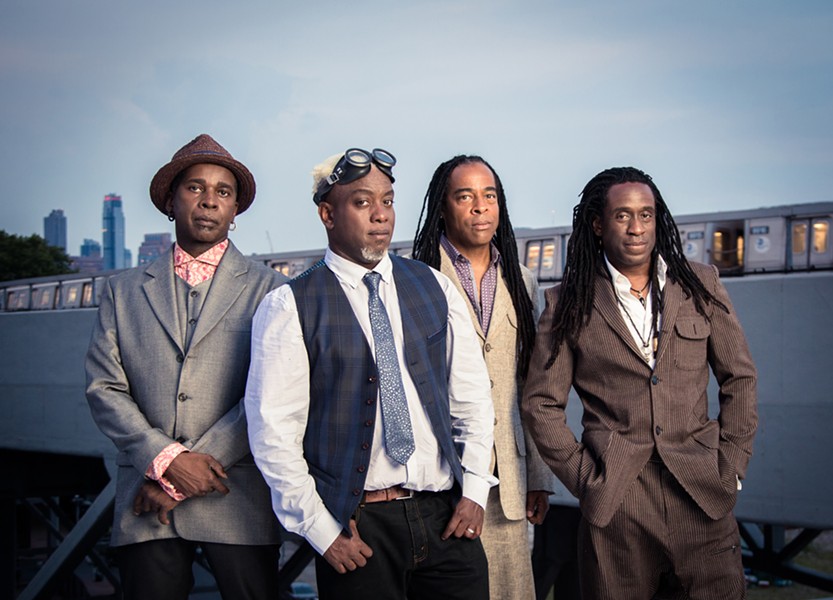 The year was 1989, and Living Colour was on the road opening for the Rolling Stones on their now-famous Steel Wheels stadium tour. The group had already had two big radio hits with the intense “Cult of Personality” and the Mick Jagger-produced follow-up, “Glamour Boys,” both from Vivid, their 1988 debut album. But as frontman Corey Glover shared with us during a recent conversation, the glamour quickly faded away when he returned home during a break in the tour.

“The only way that things changed was just the people’s own perception of who and what we were. I don’t think anything really changed for us,” he says in a phone interview. “During the Steel Wheels tour, I got off the road for a minute, and my mother handed me a bucket of paint and a paintbrush and said, ‘Paint the front porch.’ So I had to do that. Nothing changed at home and nothing changed in my regular life. It just changed around me and their perception of who I was changed. I was still who I was, and I’m still doing what I was doing, still taking the subway to wherever it was I was going. Nothing really changed dramatically — not initially. But then you slowly realize that things are different around you and people are treating you differently because of what they perceive about you. And that sometimes changes who you are as well.”

Guitarist Vernon Reid had done session work on Jagger’s second solo album, Primitive Cool, and that ended up being a good gig in more ways than one. After working with Reid, Jagger took a field trip to go check out a Living Colour gig and liked what he saw. He offered to work on demos with the band and became an important advocate for the group, eventually putting them on the radar of Epic Records, who signed Living Colour to a long awaited major label record deal years after many labels had seen the group and passed on them.

“We spent a week and a half or two weeks [working with Jagger, prior to getting signed],” Glover recalls. “What I thought was very interesting were the conversations that we had. Jagger and I at one point were talking about music and we’re talking about the blues and we’re talking about all of this music that I had at that point just discovered. The next day, he brought me a cassette of the 78s and the 33 ⅓ albums that he had in his house. He made me a mixtape, just to further my education. So I thought that was great.”

Jagger later explained the choice of Living Colour as the opening act for the Steel Wheels tour, telling the L.A. Times in an interview that Living Colour and Guns N’ Roses, who opened the Los Angeles dates, had been chosen for a very specific reason. “We added [those bands] because they're proven people's groups,” he said. “They've come up not because of music industry flogging, but on their own, because they hit a populist nerve.”

Living Colour had fought its way to prominence with its songs and powerful live performances.

“I couldn’t agree more,” Glover says. “For me, music is not just something I do just to pay the bills. It’s something I live. You know, I write about the things that I live and how I live. We all write about the things we observe and not in a therapeutic way, but in a way to give voice to something that would not normally get that kind of treatment. You don’t hear about the plight of gentrification very often in songs, you know, unless you’re doing a protest song. And we don’t write protest songs -— we write songs about the lives we’ve lived and the places we see and the people that we know.”

They continue to write those songs nearly 30 years later and occasionally, they explore the lives and words of other songwriters, as they did with their version of Robert Johnson’s “Preachin’ Blues,” one of the songs that they’ve recorded for their upcoming record, Shade. The Johnson cover was the opening moment that launched the conversations for the developing album, after they performed the song live at a tribute concert celebrating Johnson’s 100th birthday at the Apollo in 2012.

Glover describes the new album as “a sort of deconstruction of the blues in a Living Colour way.”

“The blues is sort of the bedrock of what we do, and it is the foundation on which we stand on to get to wherever it is that we’re going,” he explains. “And that’s true of all modern music, that the blues sort of informed everything about it. And what better band to sort of take a look at the blues in their own way than us. Because that’s what our songs are, modern day blues. You know, it’s telling a story, it’s telling the news, it’s giving you the whys and the wherefores of the world that we live in on a regular basis. We thought we should take that to task in some way. Whether we did that or not, I’m sure is hotly up to debate, but it’s a Living Colour record.”

Glover says it’s likely that fans will get a taste of songs from the new album when the band plays Cleveland at the end of this month.

“It gives us an opportunity to see what works and what doesn’t work and what things reach people and what things don’t particularly give the audience enough.” he says. “We’re looking to elicit a reaction, obviously and we’re looking for a specific kind of reaction. What combination of notes and intention do we have do in order to reach an audience? That’s what playing does for us. So I’m sure we’re going to play some songs from the new record from some of the choices that we have for the new record and we’ll see how people react to it.”

He says that there are about “six to 10 songs that we know are going to be on the record at this point.” But they’re taking their time with no firm release plans currently on the calendar, and Glover says that there’s a good reason for that. “We want to get the right record and get it done correctly,” he says. “Sometimes, it takes time and sometimes it takes some patience. We’re trying to exercise both of those things.”