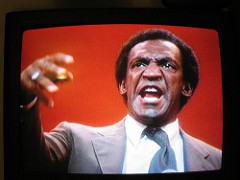 Oberlin College, that bastion of cultural hyper-sensitivity in higher ed, has at last revoked the honorary doctorate in humanities it awarded to Bill Cosby in 2010. The college's board of trustees voted on the decision at its meeting this month.

"Mr. Cosby’s admitted actions are not congruent with Oberlin College’s commitment to supporting survivors of sexualized violence, as reflected in its sexual misconduct policy, and do not epitomize the high standards Oberlin considers in awarding honorary degrees,” said Oberlin College President Marvin Krislov, in a statement.

Though Cosby has not been officially charged, more than 50 women have come forward accusing the comedian of rape and sexual assault (often facilitated by Quaaludes).

In the wake of the allegations, colleges around the country have been stripping Cosby of the honorary degrees they'd given him over the years.  Oberlin joins Brown University, Fordham University, Swarthmore College and others.

Ohio's Central State University, a public HBCU in the southwestern part of the state, removed Cosby's name from its communications building in September.

The only surprise here is that Oberlin, lately in the news for students' objections to subpar Asian cuisine — they called it "cultural appropriation" — wasn't faster out of the gate.