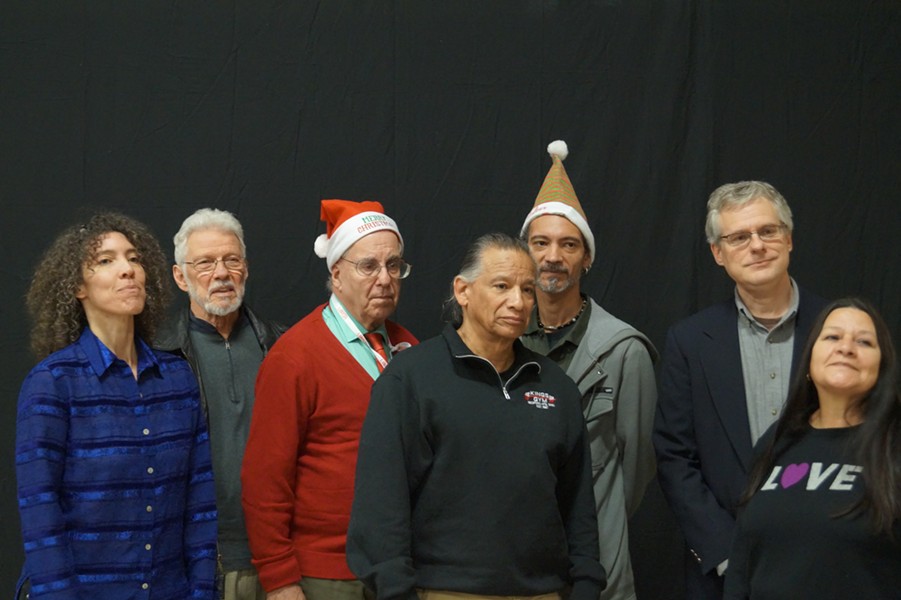 Lawyers for local Native Americans have drafted a petition asking for the immediate cancellation of the Cleveland Indians’ Chief Wahoo trademark. The petition, they say, will be filed with the Trademark Trial and Appeal Board as soon as funds for filing fees become available.

“The [Chief Wahoo] logo is a crude caricature of a proud and abused race of people that was and is a pejorative, derogatory, denigrating, offensive, scandalous, contemptuous, disreputable, disparaging, and racist designation of Native American people,” reads the drafted petition, provided exclusively to Scene.

The petition additionally asks for an estimated $9 billion in damages. Native Americans say they are owed this money by the Indians’ organization, based on profits generated by Chief Wahoo over the course of “nearly 100 years of racism, discrimination and cultural perversion.” Petitioners acknowledge, however, that monetary recovery is not part of a trademark cancellation.

The language of the petition is consciously very similar to the Washington Redskins’ trademark filing in 2014 (Blackhorse v. Pro-Football Inc.), in which the TTAB ruled that the name “Redskins” was disparaging to Native Americans.

“Chief Wahoo is the caricature of an Indian, incorporating a completely red skin tone,” reads the Cleveland petition. “This is the non-verbal communication of the racial slur, “redskins,” which the TTAB has ruled to lack federal trademark protection.”

The petition will be filed on behalf of People Not Mascots, Inc.; Robert Roche, the Director of the American Indian Education Center (AIEC); and others. Attorney Lisa Mach, who drafted the petition and serves on the AIEC’s Executive Board, said there would be a total of five petitioners (just like in Blackhorse) and that filing fees would be $300 per petitioner.

Much like in the 2014 case, if the Wahoo trademark were to be canceled, the Cleveland Indians would not be required to change their name (or even stop using the Chief Wahoo logo). It simply would mean that the baseball team could no longer claim exclusive ownership. Anyone could sell Chief Wahoo memorabilia. Customs and Border Patrol, for example, would no longer be required to block the importation of counterfeit goods bearing Wahoo’s likeness.

Robert Roche said that for years, he has tried to appeal to the baseball team on moral and ethical grounds to no avail. He has been protesting with other Native American organizations and social justice activists on the Tribe’s opening day for decades.

The Penobscot Nation, from which Indians’ outfielder Louis Sockalexis hailed, contacted the Cleveland Indians via a resolution in 2000. It called for the cancellation of Chief Wahoo and asked the team to advocate “for the elimination of racist images of Indians.” (Sockalexis is the putative inspiration for the Indians’ team name). But the Indians’ organization never responded.

Roche now says that a trademark cancellation petition feels like their only recourse.

"With these people, [Indians’ baseball executives], if you don't go after their pocketbooks, they don't care at all," Roche told Scene in 2014,

At the AIEC’s Annual Christmas party Sunday afternoon, lawyers announced the forthcoming petition to the the gathered families.

“We don’t want to eliminate Chief Wahoo,” said Joseph Meissner, one of the attorneys. “We just want to retire him. He has served long enough. The poor guy has been used by the Cleveland Indians baseball team, probably to earn billions of dollars. That’s blood money from Native Americans.”

Bob Begin, attorney and former pastor at St. Colman’s Parish, said in a brief statement that he remained “unbelieving” that so many people still supported Chief Wahoo.

“This is obviously offensive,” he said. “Once people tell me, ‘this offends me,’ I’d never continue using it.”

Tim Russo, a research assistant in Meissner’s office (and former candidate for County Executive), is conducting international jurisdictional research on behalf of the petitioners. Prominent local attorneys James Levin and Terry Gilbert, who were not present Sunday, are also members of the legal team.