Our Favorite Scene Cover Stories of 2015

As we proudly kick off 2016 with our fourth annual Comics Issue, we also look back on 2015.

In the words of Mayor Frank Jackson, it was a "troubling year" for Cleveland. That represents a step back from 2014, which, again in Frank Jackson's words, was a year of "incredible highs and incredible lows."

All year, Scene has tried to chart the city's troubles and its challenges, even as we've told you about concerts to catch and new menus to savor.

Below, we've selected roughly one cover story per month of which we were particularly proud. If you've picked up a physical copy of the magazine with any regularity, you know that each week we publish a "cover story."  These are narrative features of length and (hopefully) depth which strive to introduce you to interesting people in Cleveland; teach you (or help you process) relevant news items which require more thorough or more precisely vectored analysis; or, like this week, represent the work of several contributors on a given theme.

If you haven't read any of these, do yourself a favor and spend some time with them. And feel free to let us know which stories from 2015 were the most impactful (or the most fun) for you. Feedback helps us out as we pitch stories and make decisions about upcoming coverage.

JANUARY: Former staff writer Doug Brown dives deep on the East Tech basketball team — a bright spot for CMSD athletics and a local team "actually worth rooting for" — plus their inspiring coach, Brett Brown, in "The Program."

MARCH: It's always a pain in the ass to put together, but when our annual "Best of Cleveland" is complete, you really do get a sense of the people, places and things that locals cherish.

APRIL: One of Scene's favorite things to do is cover wacky personalities that you probably have seen around town but know nothing about — Super Pimp, Mall Guy, Door George. Add Guitar Man to the list. Here, in "Guitar Man Was Here," Managing Editor Eric Sandy gets to know (and love?) the Cleveland Superhero who's bringing smiles to the faces of patrons on E. 4th and W. 25th.

MAY: Former staffer James Renner, he of the forthcoming True Crime Addict, takes you on a blistering tour of some of the region's gnarliest and most mysterious unsolved crimes. Fans of Netflix's Making a Murderer, and others, will surely appreciate "Northeast Ohio's 50 Most Frustrating Cold Cases."

JUNE: If you read Clevescene.com, you surely see Chris Parker's famously meandering Cavs' game recaps. He is a mighty and winsome courtside observer and the most recognizable of the Cavaliers' reporting corps. (Bill Hader even pointed out Parker's extravagant mustache at the Akron premiere of Trainwreck). In this off-season feature, "King Midas," Parker takes a closer look at LeBron James' empire off the court. JULY: If you're not hooked after section one of "The Corvette Thief," editor Vince Grzegorek's marquee profile of a career criminal, then I don't know what to say. Buckle up — get it? — for some serious twists and turns.

AUGUST: Eric Sandy was at your service in this feature story about the spectacular mismanagement of the summer music festival put on by Cleveland's own Machine Gun Kelly. Clunkily titled but deftly reported, "Machine Gun Kelly's EST Fest Drew Thousands to Nelson Ledges Last Year. So Where'd the Money Go?" was one of Scene's most popular stories of the year.

AUGUST: Okay, so we picked two for August. "Forgive us our Trespasses" was my exhaustive (and perhaps exhausting) look at the media coverage of Paul Pelton, the Lorain man who was railroaded by police and vilified by the media after he filmed the grisly aftermath of a car crash.

SEPTEMBER: The Lakewood Hospital saga has been one of the biggest stories in the Cleveland inner ring suburbs all year. Eric Sandy has been covering the issue extensively. In "Under the Big Top" — THE DEFINITIVE LAKEWOOD HOSPITAL STORY — he walks you through the political circus in a comprehensive way.

OCTOBER: I commuted to Willoughby, Ohio, about a thousand times for "Dixieland, Ohio," a story about the regional support for the Confederate Flag, fueled (at least in Willoughby's case) by the local high school's "Rebel" mascot. Consider this your local flavor on a major national cultural debate. 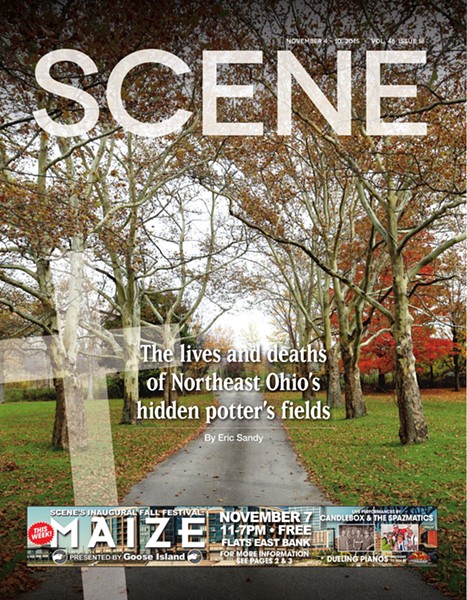 NOVEMBER: Eric Sandy, in "A Quest Across the River Styx"  writes about a subject most people don't think about — what happens to the poor and homeless when they die? It's the latest story that Eric has written about homelessness in Cleveland, and it's an affecting portrait.

NOVEMBER: My look at the controversies surrounding development on one particular intersection in Ohio City — "Hingetown Throwdown" — aspires to do what our commenters repeatedly say we should: look at an issue from all sides.

DECEMBER: Vince wrangled a small army of hilarious contributors for the 2015 Comedy Issue, the best (and easily the most popular) Comedy Issue to date.

Thanks for reading all year, and please let us know if there's a particular subject or story you'd like us to pay attention to in 2016.