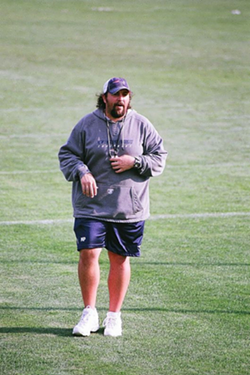 In the last five days, the Cleveland Browns have conducted head coaching interviews with seven different candidates. Two of them — Adam Gase and Jerome Henderson — are headed to Miami, and a few others may also be dropping out of the running – and not because they’ve landed a new job.

According to a source, several of the first-time coaching candidates, especially New England defensive coordinator Matt Patricia, seem to be feeling reluctant about choosing Cleveland as their first head coaching destination.

On the surface, the 41-year-old Patricia seems like he could be an outstanding choice to help assist the new-fangled Browns leadership. With the elaborate executive system in place to dictate the roster and major decisions, Patricia could pour his entire focus into Xs and Os as the head coach, while also likely still call the plays on defense, his pride and joy. According to some reporters, Patricia might not be against the use of analytics to help make football decisions either. Firmly entrenched in this new way of thinking, Cleveland’s power players ideally want to choose a younger head coach to grow with over the course of time. This seems like a win-win.

But because he’s aligned with Bill Belichick, Patricia will remain a hot coaching name for many seasons to come, and the source said Cleveland is (obviously) not considered an ideal place to begin a head coaching career. Of the six coaches the Browns have fired since Mike Pettine, only one of them have returned to the sidelines as a head coach (Romeo Crennel), and that includes former Belichick protégé  Eric Mangini. Through Jimmy Haslam’s quick trigger finger and the perpetual losing and chaotic reputation, the owner may have alienated some of football’s brightest minds.

On NBC’s broadcast of the Seahawks-Vikings game, Cris Collinsworth pointed out Minnesota’s Mike Zimmer was once offered the head coaching gig at Nebraska and had the inside track on a few other NFL opportunities, but the longtime coordinator was not going to jump at the first offer. He waited for the Minnesota gig and it’s ended up being the perfect fit. His approach seems to be impacting other candidates who already possess strong credentials as coordinators of solid organizations.

Becoming an NFL head coach used to be the most sought after prize, no matter the NFL franchise. Now? It’s become much more of a strategic career move. It’s understandable why Patricia would view the Cleveland job as a risk to his future.

If the Browns do land Patricia, something not totally out of the question, it should be viewed as a major victory for Sashi Brown and Paul DePodesta. Brown is a negotiator at heart and has salesman skills to frame interview questions in a way to entice someone like Patricia. But the reality of the Browns’ situation is that they not only have to convince coaching candidates to trust their involvement in football decisions, they’re still fighting the league-wide perception that Cleveland is a coach killing factory.

Of the candidates the Browns have interviewed, Doug Marrone and Hue Jackson are the only applicants with previous head coaching experience. Pouncing on Jackson seems like the best option on the table.

This post has been updated. It previously stated Crennel hadn't been a head coach since his dismissal by the Browns.