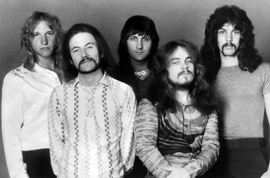 The self-proclaimed “greatest ’70s hard rock band never to make it,” local hard rockers Granicus have announced they'll reform and release a new album. According to a press release the band sent out, the group’s three remaining active members — drummer Joe Battaglia, guitarist Al Pinell and bassist Dale Bedford — are currently trying to gain greater control of their debut record, which was pirated and released in Europe.
They’re also writing new music for what will be their third album. Lead guitarist Artie Cashin, who appeared on the band's second release, 2010’s Thieves, Liars and Traitors, will return for the upcoming third record. Singer Woody Leffel will not be involved with the record, so the band has recruited local Gerry Schultz to sing.