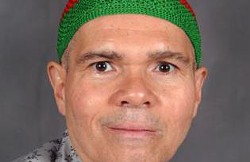 Update: Four months after Julio Pino burst onto national headlines — because combine a college professor with ISIS and everyone's gonna want a piece of that story — all is mostly quiet for Pino and Kent State.

The Beacon-Journal has a small non-update update on the story this week. Basically, Pino says the FBI hasn't been in contact with him and his spring classes went by swimmingly and without incident. Further, the ABJ reviewed public records from the university that were devoid of any complaints from students through the first semester and summer of last year of Pino recruiting students in any way. Despite the criticism and Pino's history, Kent State "declined to terminate or discipline him," the ABJ notes.

Special Agent Vicki Anderson, an FBI spokeswoman, said investigators are still looking into the accusations against Julio Pino, an outspoken Muslim convert with a history of anti-Israel and pro-Palestinian rhetoric.

“I don’t have anything to report on that just yet,” she said. “I’m sure we’ll put something out the moment it moves to the next step.”

(Original story 1/21/16): A Kent State University professor who has already mounted a track record of controversial statements is now being targeted by the feds. The investigation reportedly is looking for ties between Julio Pino, a KSU associate history professor, and ISIS, the psycho-death-cult-cum-terrorism-factory currently holding down a large chunk of Iraq and war-torn Syria.

According to reports, first broken by the campus student newspaper, the FBI and Department of Homeland Security have been interviewing students and faculty around campus about Pino. The activity in question allegedly involves recruiting for the terrorist organization.

Pino has denied the charges.

Considering some of the professor's more outlandish behavior over the last ten years, it's not really a shocker that he blipped on the government's radar. Pino — a former Fulbright Scholar and member of Phi Beta Kappa specializing in Latin American history and the third world — first drew campus ire in 2002 when he wrote a column in a campus newspaper eulogizing an 18-year-old suicide bomber.

In 2007, Pino got his boss fired when the department head allowed Pino to take a six-week leave to go to the United Arab Emirates to learn Arabic. It was fully paid. Administrators fired the department head, saying he didn't follow protocol greenlighting Pino's trip, and reeled the professor back to campus earlier.

But it was a 2011 incident that hammered Pino's reputation into place. The professor attended a lecture by an Israeli diplomat named Ishmael Khaldi. During the session, Pino shouted "Death to Isreal," and barded back and forth with the speaker.

Now, reports from various media outlets say Pino is currently being investigated. Agents were on campus recently, talking with faculty and students. In an interview below with KentWired.com, the professor denies he has any ties to the group.

As a tenured prof, Pino is still teaching — a development that's likely to get a mixed reaction from his pupils. According to RateMyProfessors.com, Pino has a B minus rating. The specific comments from students are pretty far-flung across the gamut. From:

WORST professor I've ever had. stupidly unclear directions for essays which he doesn't even grade. bases papers on films but lectures the book?! inconsistent grading. pushes his personal views WAY too much. stay away from him. awful professor.


Dr. Pino is extremely knowledgeable about all history. He does not use powerpoint, but was definitely one of my favorite teachers I have had. He has his own stubborn views that may offend you. If you are not extremely easily offended, and can write a paper every two weeks, you are golden. No tests, but essays instead. His grading is inconsistent.


Professor Pino is an outstanding teacher and has opened my eyes to the corporate raiders who have robbed future generations of everything Amerika has to give us as well as keeping the poor and diverse peoples in their place. We need more professor like him and I highly recommend him to all students who care about improving our society and future.


The worst class I have ever had. Stay away from him


We reached out to Pino yesterday via email for comment. He has yet to get back in touch.