The beer brewing process begins in the milling room where the grains are weighed and crushed. Then it’s off to the three-vessel brewhouse where those grains are steeped in hot water, strained and the resulting liquid boiled. When cooled, the liquid is inoculated with yeast and stashed in a fermentation tank. When ready to drink, the beer is popped into a keg or bottle.

When the Market Garden Brewery production facility opens to the public in the coming weeks, visitors will get an up-close and personal look at every step along that path. The Ohio City brewery was custom built to maximize the visitor experience, with elevated catwalks guiding guests on a delicious loop from mill to bottle fill.

More than a year’s time – and “a few million dollars” – went into the construction of this modern, sun-soaked brewery in the heart of Cleveland. It wasn’t easy converting the largely unused Culinary Arts Building, tucked behind the West Side Market, into the large-scale brewery, but the owners wouldn’t have had it any other way.

“You toy with the idea of going to a small parcel of land in an industrial park, and how much money you’d save with little to no construction and less investment,” says co-founder Mark Priemer. “It teases you. But this was a chance in a lifetime to be right here in Ohio City, right by the West Side Market, next to our restaurant, so the decision was made.”

Located on an acre of land in one of Cleveland’s oldest neighborhoods, the site was not without its challenges. Co-founder Sam McNulty whips out an old residential map from the 1840s showing the houses that once existed beneath our very feet.

“It looked like an archeological dig,” McNulty says of the site. “There was hand-cut sandstone foundations, there was an old German cellar.”

The exposed brick wall of one of those houses still stands in striking contrast to the modern stainless steel brewing equipment.

This is the sixth brewery that head brewer Andy Tveekrem has had a hand in building. His beer-brewing resume stretches back to Great Lakes Brewing Co. and Dogfish Head, before starting with Market Garden and then Nano Brew. With each new gig, he says, he’s gotten smarter about building a better brewery.

It starts, literally, with the floor. Every square inch of the production facility has radiant heating, which in addition to being cozy on the toes happens to be a lot safer. Brewery floors are constantly being hosed down, and warm tile floors dry considerably quicker than cold ones.

The brewing equipment was designed and built in Germany by Esau & Hueber and shipped over. But it didn't come alone. The 90-year-old company also sends over an assembler, who works on site for three weeks. That person is then replaced by an electrical controls technician, who also sticks around for three weeks, all the way through first test brews.

Tveekrem, who stands six-foot-four, had the company customize his brewing equipment so that it stands higher off the ground than what is considered standard, providing easier access to the valves, pipework and motors that typically sit just above the floor.

“It’s important to have the brewhouse customized to the brewer,” he says only half-jokingly. “If you try and do maintenance on them, you’re literally laying on your back in a puddle of dripping-hot stuff. It’s a nightmare.”

The new production facility brews 35-barrel batches of beer compared to the 10-barrel batches next door at the brewpub. But that doesn’t tell the whole story when it comes to brewing capacity, the brewer explains.

“The capacity is determined by the fermenters we have,” he says. “Right now we have enough for about 7,000 barrels per year. But we’ve got room for two more rows of larger tanks, so we’ll be able to do about 20 or 25,000 barrels in the fermentation hall that we have.”

Down the road, when the back half building is put into play, the capacity can ultimately reach 80 to 100,000 barrels per year in the 44,000-square-foot complex.

“We’ve invested a lot up front in the ability to expand fairly seamlessly,” adds Tveekrem. “We really wanted to think this through and make the brewhouse fit the building.”

As visitors make their way out of the fermentation tank room they’ll pass a row of labs, which Tveekrem refers to as “the pilot house on the ship.” In order he designates them as the analytical lab, microbiological lab and sensory analysis lab.

“The back of the house is every bit as important,” explains McNulty. “We’re making sure that every beer that we send to market is the best possible beer we can brew. It may not be sexy, but it tells the story of how obsessed we are with making sure this is beer we’re proud of.”

This week, the very first batch of beer was brewed at the production facility. It was the Prosperity Wheat, which will soon be joined by batches of other Market Garden flagship brews, Progress Pilsner and Citramax IPA. In addition, seasonal beers like Hella Mango IPA, which, like all beers, started life as an experimental brew at Nano, will be brewed and released.

“We also have the Nano Series, single batches that we’ll drop a few times per year that scratch the itch of the beer geek,” says co-founder Mike Foran. Think Trouble Honey IPA and Wallace Tavern Scotch Ale, he adds. 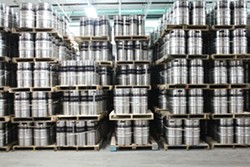 As early as April, Market Garden beers that are bottled and kegged in the onsite packaging room will be distributed by Superior Beverage throughout Cuyahoga County. They’ll be showing up in bars, restaurants and retail stores, something the company couldn’t do prior because of demand and capacity issues at the brewpub.

Tours ends in a sunny tasting room that overlooks the heart of Ohio City. Through the massive two-story windows, guests have views of the West Side Market, Market Garden brewpub and a wide swath of W. 25th Street businesses. Here, visitors can sip fresh beer and purchase beer to go at retail. In addition to six-packs, customers can call and order a keg, which will be loaded directly into one’s car via the curbside pick-up system.

Leaning against a temporary railing, owner Mark Priemer tells the small group, “This is where we all started in the neighborhood, maybe 11 or 12 years ago with Bier Markt. Being here is absolutely being part of the neighborhood. Having that view onto what is our home, Ohio City, the Market District, is so important for us. Putting our best face forward to the neighborhood.”

Earlier, brewer Tveekrem echoed those sentiments. “It’s what we want to give to the area.” he says. “I want people to say hey, we‘ve got to go down to W. 25th and check out the brewery, and go to the market and hit some of the bars and restaurants and bring it all together.”