Theater Review: "The Mountaintop" Comes With a Big Surprise at Cleveland Play House 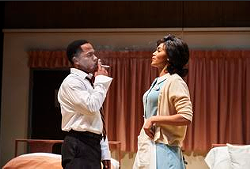 SPOILER ALERT: DO NOT READ THIS REVIEW IF YOU PLAN ON SEEING THIS PRODUCTION. THERE IS A BIG SURPRISE IN THE SHOW THAT WILL BE REVEALED IN THIS REVIEW.

It is common practice for critics not to spoil surprises that occur in plays or movies, so that audiences can experience them fresh. Usually we skate around that big shocker that’s sweating and heaving in the middle of a show, referencing it in hushed tones and oblique asides.

Well, after a couple days of reflection, I say to hell with that. I want to reveal the surprise in The Mountaintop because I find it particularly disturbing. So if you want to preserve the mystery, you can bail out now.

If you’re still reading, here’s the deal. This is a play that takes place the night before Dr. Martin Luther King, Jr. is going to be assassinated. Set in his room at the Lorraine Motel in Memphis, King is spending a late night hour or so talking with Camae, a maid who brought him coffee and the next day’s newspaper.

Playwright Katori Hall has happened upon a conceit that is quite compelling, since we know the character named King has only a few more hours to live. So we hang on his every word. But this King has just come back from his speech that evening in which he virtually predicted his own imminent death (“I’ve seen the promised land. I may not get there with you.”) But he is feeling frisky back at the hotel.

We see King flirt with Camae as the feisty maid talks candidly with the civil rights icon, dropping f-bombs here and there and then apologizing. All this gives us a view of a King who is flawed and human. And up to that point, about halfway through the one-act show, it’s mildly interesting.

But then the tables are turned when the big surprise is revealed: Camae isn’t a maid, she’s actually an angel of death, come down to usher King into heaven. She’s the flip side of Clarence, the Angel 2nd Class in It’s a Wonderful Life, offering an untimely demise instead of a second chance at happiness.

So that means that, in this telling, the assassin James Earl Ray wasn’t just a contemptible, retrograde racist and criminal, he was an agent of the Lord, doing God’s work here on Earth. And to double down on that idea, Camae informs us that God is actually a black woman. Camae even rings Her up on the motel phone so that King can plead for his life, which he does for a couple minutes. But She eventually hangs up on him.

After the initial giddy rush of adrenaline you feel in the presence of such a surprise, there are other less pleasant sensations that start to creep in. If Camae was there to prepare King for death, why did she pretend to be a maid for so long? Just for kicks? Seems a bit perverse, conning a man whom you know is doomed. Maybe things are boring up there in heaven.

Ms. Hall is an African-American playwright who, in this piece, actually creates a scenario that white supremacists would love: Hey, don’t blame us, God made us do it. Of course, Hall isn’t seeing it from that perspective. She wants us to view Dr. King’s murder as something more than a carefully planned homicide, wrapping it up in cheesy martyrdom and then glossing it at the end with a flash-cut montage of events that happened after King’s death (including the O.J. Simpson trial!), drawing facile and mostly nonsensical connections to King’s heritage.

Setting that issue aside, which isn’t easy, the performers do a fine job. Ro Boddie is nicely understated as King, not trying to capture the original’s stentorian speaking style. And Angel (yes, that’s her name) Moore is sharp and amusing as Camae. Director Carl Cofield does what he can with a script that leaps from the mundane to science fiction in one fell swoop.

The production is beset with a couple big theatrical effects that appear to be called for in the script, including a pillow fight between the two characters that looses a torrent of feathers from above. Unfortunately, even with all the technical frou-frou at the end, The Mountaintop is shallow and manipulative, overreaching to make us consider Dr. Martin Luther King, Jr. a saint. He was simply a remarkably gifted man who fought boldly and eloquently for human rights. And that should be enough.