Johnny Manziel's Agent Has Dropped Him; Manziel's Father Tried to Get Johnny Back in a Rehab Facility

February 05, 2016 at 11:03 AM
3 comments
Johnny Manziel's agent, Erik Burkhardt, who had long been one of the few people in the troubled quarterback's corner, announced today in a statement that he has terminated his relationship with his client. This comes on the heels of a fuller account from the police down in Texas about what transpired last weekend as Manziel's exgirlfriend claimed that Manziel struck her, appeared to be on drugs, and made references to killing himself and her.

Burkhardt's decision comes at the same time Manziel's own family worries about the 23 year old. Via the Dallas Morning News: "Johnny Manziel's family is concerned for his well-being, but the NFL quarterback has twice declined to be admitted to area rehabilitation facilities in the last week, according to his father, Paul Manziel.
"I truly believe if they can't get him help, he won't live to see his 24th birthday," Paul Manziel told The Dallas Morning News."

Burkhardt's sobering statement is below. 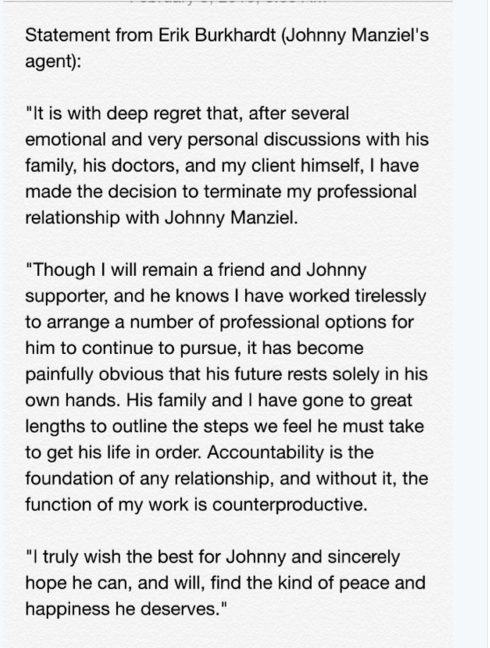