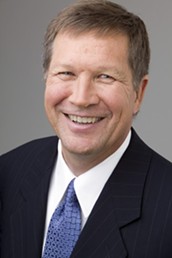 After John Kasich's second-place finish in the New Hampshire primary this week, Planned Parenthood is launching an offensive against him. A five-figure video ad buy and a social media campaign will attempt to hold Kasich's feet to the fire on abortion issues.

This is especially critical now that the Ohio House has voted to defund Planned Parenthood in a 59-32 vote. That bill now goes to Governor Kasich, and given his visibility in the presidential campaign, his decision will be much more public than his efforts to restrict abortion access in the past.

As Ohio Governor, Kasich has signed every abortion and women's reproductive health provision that has landed on his desk since he took office in 2011. Planned Parenthood is concerned that because Kasich has billed himself (and is widely considered to be) a moderate alternative, at least compared to the likes of Donald Trump and Ted Cruz, voters might overlook his ghastly track record.

(To get a fuller picture of the havoc Kasich has wreaked upon women's health care in Ohio, read Allie Gross's piece on the subject in FiveThirtyEight).

"Why would Kasich cut funding for life-saving breast and cervical cancer screenings," it asks, "and 50,000 tests which stop the spread of HIV and other diseases?"

Ohioans and Americans deserve answers for why you are attacking reproductive health care. #AskDrKasich pic.twitter.com/ayd6dsjhNs