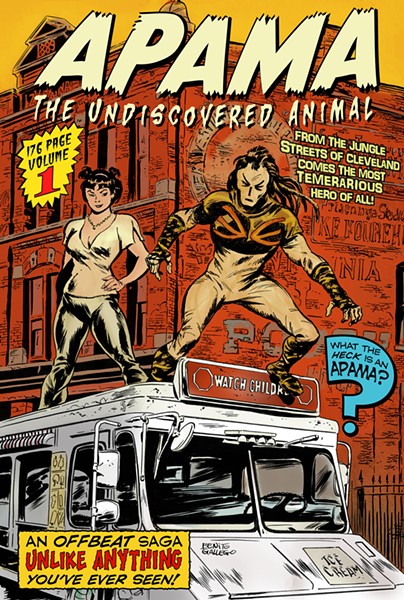 In local filmmaker Ted Sikora’s 2007 film Hero Tomorrow, a pot-smoking comic-book artist attempts to publish his own character, Apama, a masked superhero who’s stronger than a gorilla. The film, in turn, spawned that very comic book. Now, the local creators of the comic have announced a new feature film that is in development based on the comic book series. The story will center on the Cleveland-born Hungarian ice cream truck driver Ilyia Zjarsky who discovers an ancient scroll that “allows him to gain the powers of the most savage beast man has never known.”

Longtime residents Ted Sikora and Milo Miller wrote the comic books and included a number of Cleveland references in them. Sikora says he considers the comics to be "a return to what comic books were like in the 1970s."

Diamond Distribution, the largest supplier of comics in the world, is distributing the Volume 1 collection, which compiles issues 1 through 5. The book was featured as one of only six staff picks in Diamond’s November catalog, and arrives in comic shops throughout the country this week. Comic Nerds Unite chose it as their Breakout Book of the Year; Comics Bulletin called it "insane, brilliant, and wonderful"; and Raging Bullets says it "can’t recommend this comic enough.”

Now, the duo behind the comic book is at work pitching the film treatment to potential executive producers both locally and in Hollywood.

“The positive response to the stories really got us thinking about the potential for a feature film based on the characters; it didn’t take us long to generate a story idea that got us both excited,” explains co-writer Milo Miller in a press release.

Miller and Sikora say a feature film adaptation of the Apama story is officially in development. They plan to shoot the film in Cleveland with a "substantially larger budget" than Hero Tomorrow.

Sikora and Miller will appear at Wizard World Cleveland, which takes place from Feb. 26 to 28 at the Cleveland Convention Center. They'll also host a panel presentation, Cleveland’s Resident Superhero — APAMA! PHASE
2, from 2:30 to 3:15 p.m. on Sunday, Feb. 28.